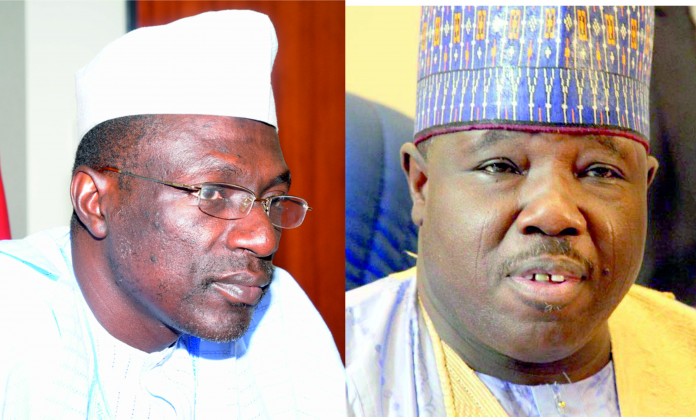 • Party now a kingdom without a king

Several stakeholders are of the view that it was the similar game plan of internal party confusions and treachery by the northern leaders that caused the defeat of former President Goodluck Jonathan in the 2015 presidential election. There is rising apprehension that the raging leadership crisis may be a ploy to destroy the PDP and make it weak to challenge the APC in subsequent elections. Modu Sheriff, in particular, had mobilized his thugs contending for forceful occupation of the Wadatta House National Secretariat of the PDP by fiat contrary the resolutions of the Board of Trustees (BoT) and the PDP Governors which recognized Makarfi as the interim leader. Makarfi also mobilized his own batch of thugs, all under the aegis of supporters or loyalists, to subvert the mission of the Sheriff group which precipitated pandemonium between Monday, Tuesday and Wednesday last week in Abuja.

The PDP further declared that the Caretaker Committee of the party headed by Senator Ahmed Makarfi was duly appointed in line with the Constitution of the party.

The party stated that the National Convention was convened by the National Executive Committee headed by the former National Acting Chairman, Senator Modu Sheriff, who himself participated in pre-convention events, including, his participation in the screening exercise.

ALSO SEE: Is APC doing to PDP what PDP did to AD?

Making the submission on behalf of the PDP at the Federal High Court in Port Harcourt presided over by Justice Abdullahi Liman, counsel to the PDP, Oladejo Laminkanra (SAN), in an originating summons stated that: “Modu Sheriff submitted himself for screening at the Port Harcourt National Convention. Realising that he has lost his bid to be national chairman, Modu Sheriff, alone, without consent and consultations with the National Executive Committee claimed he postponed the convention. Modu Sheriff had no such powers to postpone a convention approved by the National Executive Committee.”

The PDP further submitted that: “Modu Sheriff is not the chairman of PDP. He was never elected at any convention and he is subject to the extant judgment of AB Mohammed J (FCT High Court, which Modu Sheriff is curiously seeking to enforce.”

The PDP argued that no court stopped the party from holding its national convention. It added that the National Constitution of the PDP was also never suspended; hence, the National Convention derived its powers from the party’s constitution.

“An interim order met with the applications mentioned does not lapse until 14 days after arguments are taken. That is 14 days from May 16, 2016,” Laminkanra contended.
He noted that the suit was filed by the PDP and not Senator Ahmed Makarfi and Senator Ben Obi as claimed by Sheriff.

Justice Abdullahi Liman adjourned the matter to July 4, 2016 for judgment. Sheriff had invaded the Secretariat with his associates, Prof. Adewale Oladipo and Alhaji Adewole Adeyanju, the sacked secretary and auditor of the party, insisting that their ouster in May at the party’s convention in Port Harcourt was illegal.

Hundreds of youths armed with placards and tree branches had gone to the PDP secretariat to unleash their anger on the Sheriff faction. Sheriff was, however, not present at the secretariat at the time youths were on rampage but Oladipo and Adeyanju were harassed by the mob.

Sheriff had through a statement by his media adviser, Inuwa Bwala, accused the Ahmed Makarfi-led Caretaker Committee of sponsoring the protest in order to undermine his leadership. He also accused the security agencies of taking sides, wondering why they stood aside as the protest went on.

“Makarfi and his sponsors want to create the wrong impression that Sheriff is not reliable, whereas it is an open secret that Sheriff has given credible and honest leadership to his state, to Nigeria and to the PDP, even for the short period he has been in the saddle of leadership than Ahmed Makarfi,” Sheriff stated.

Makarfi had accused Sheriff of being sponsored by the All Progressives Congress (APC) and the Presidency to destroy the PDP. This, Sheriff debunked. “… We wish to challenge Ahmed Makarfi to name the date, venue and names of those in attendance at the so-called meeting Sheriff allegedly had with some Governors of the APC. Again how could Sheriff be a stooge when he remains the only PDP stalwart that speaks out against the APC since the party lost the 2015 elections,” Bwala had stated.

“For the avoidance of doubt, we wish to state that Ali Modu Sheriff left the APC at its formative stage, and has never had anything to do with the party or any of its stalwarts since his departure. One wonders how Ahmed Makarfi and his cohorts could tell lies just to divert attention from the real issues at stake,” he declared.

Moreover, the APC had refuted its involvement in the PDP crisis. “However, it should be put on record that the PDP forced on itself whatever crisis it is troubled with today due to its politics of imposition and other undemocratic practices which the APC abhors. The PDP should put its house in order rather than playing to the gallery and blaming others but themselves for their sins which has come to hunt them. Also, it is evident that the PDP has chosen to employ diversionary tactics because of its inability to produce credible candidates for the forthcoming elections in Edo and Ondo states,” APC had declared.

Meanwhile, the PDP Governors and the BoT have dissolved the NWC, finally nailing to the cross the sack of Modu Sheriff.