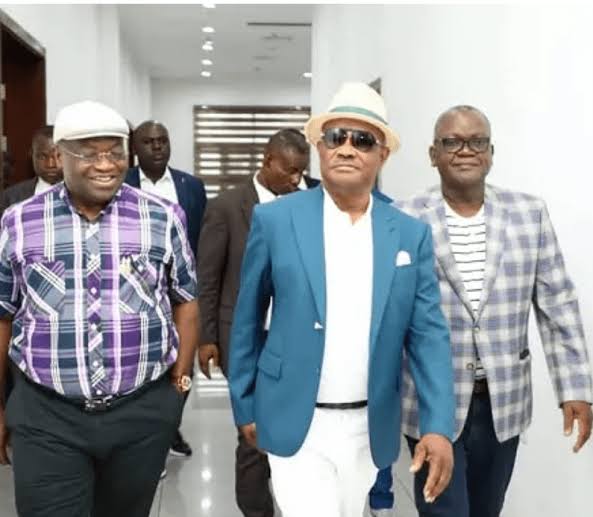 On his return from London with Rivers Gov Nyesom Wike, Benue Gov. Samuel Ortom has been talking back and forth on the media reports he differed with Wike for the first time.

Following his meeting with the PDP BoT last week, there have been reports he rejected the calls for national chairman Iyorchia Ayu to resign.

Wike, who has been implacable since he lost the presidential primary, is ready to sacrifice Ayu—or else there will be no peace for the party and its presidential candidate Atiku Abubakar.

But many have insisted it won’t happen—that the party is bigger than Wike and his cohort, including Ortom, Govs Okeiie Ikpeazu, Seyi Makinde, and Ifeanyi Ugwuanyi

Some party stalwarts from Benue, where Ortom and Ay come from, are hitting their governor for fawning on Wike.

But Ortom denied it.

“In Benue State, we do not have any problem, from bottom to top we are good to go as far as our party is concerned,’ he told journalists in Benue on Tuesday.

The BoT members were here some few days ago and we deliberated on the matter they sought my opinion first to know what my thinking was about the crisis. I told them that truth as far as I am concerned; and they took it with passion and also asked me for recommendations which I gave. That was all. That was done and I hoped that they will do justice to it so that our party will take over power in 2023.

Commenting on the reports, Ortom said he just came back from London with Wike this morning (Tuesday).

“We are friends and I still maintain my stand on what I said. I have not moved away from there, that I still sympathise with Wike on the injustice meted on him. Politics is about interest and where your interest is not protected, you have a right to protest and I think that is what is happening,” he said

“The party leadership has not been fair to Governor Wike based on activities that took place during and after the convention.

The governor droned on talking on injustice and sympathy, parrying the core of the reports that he objected to Ayu resignation, something Wike has turned into a pet project.