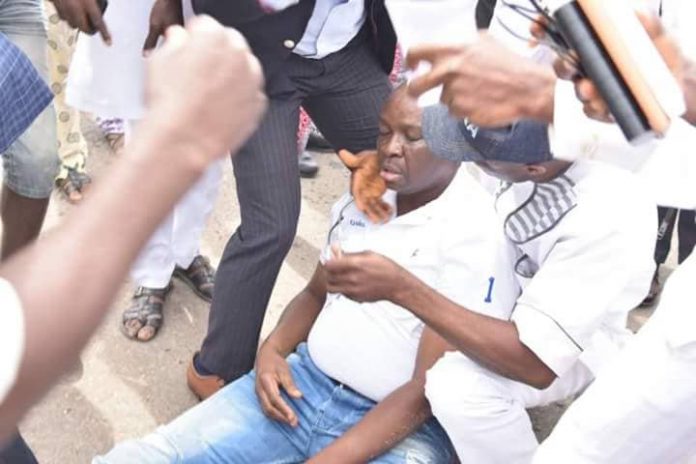 National Chairman of the Peoples Democratic Party (PDP), Prince Uche Secondus, in Abuja on Wednesday chided the Police over the assault of Governor Ayodele Fayose of Ekiti State at a time the various political parties are rounding up their campaigns for the Saturday governorship election in the state.

National Daily gathered that Secondus at a news conference in Abuja described the assault as “a complete attack on democratic order and direct assault on Ekiti State and her people’’.

The PDP National Chairman was of the view that the attack reflected that Nigeria’s democracy has finally come under heavy attack.

Secondus decried that following the All Progressives Congress (APC) desperation to take over Ekiti, the Federal Government deployed armed police personnel led by top officers, including Commissioner of Police in charge of Mobile Unit.

The chairman noted that the police blocked the state’s Government House, attacked and placed the democratically elected governor under house arrest.

Secondus had declared: “At the moment, no one goes in or out of the Government House.

“The invading police squad sacked the official security at the Government House, fired sporadically into the premises during which Gov. Fayose was beaten by policemen and brought down by volleys of teargas while several others were injured.’’

He remarked that the PDP was informed that the attack was in line with the earlier boast to “cage” Fayose ahead of the election.

The PDP National Chairman further declared: “In fact, we have been made aware that the invasion was a plot to assassinate Gov. Fayose and blame it on accidental discharge by one of the policemen.

“The PDP marks this siege on an elected governor and a government house as a recipe for violence.

“It is a complete attack on our democratic order and direct assault on the corporate existence of Ekiti and her people as a federating part of our nation.”

Secondus stated that information available to the PDP revealed that APC planned to deploy its governors in each local government area of Ekiti to “coordinate its rigging plot”.

He maintained that intelligence had also revealed that the 30,000 policemen and some “compromised” military personnel deployed to Ekiti were being positioned to embark on mass arrest and harassment of citizens.

It was his view that the attempt was with the view to frighten the people and prevent them from participating in the election.

Secondus remarked that the PDP believe that all harassment, threats, arrests or even murder, would end in vain, noting that the people of Ekiti State are fully ready now, more than ever, to face all.

National Daily also gathered that PDP Board of Trustees (BoT) Chairman, Sen. Walid Jubril, held another press conference in Abuja where he admonished security operatives to ensure that the election in Ekiti will be peaceful.

Jubril warned that the deployment of security personnel for the election should not lead to war, destruction of lives and property.

“We did not want this security to be transformed to regret.”

Former Vice President Atiku Abubakar also counseled the Federal Government to do everything within its powers to douse the tension being generated over the governorship election in Ekiti.

Abubakar, in a statement by his media office, said that images coming out of Ekiti “in the last few hours” were uncivil assault on democracy and “falls short of democratic best practices”.

The former Vice President advocated that instructions must be immediately given to all law enforcement bodies on ground in Ekiti to act in the best interest of Nigeria.

Abubakar affirmed that it was not in the place of government to harass, intimidate, hound and humiliate political opponents in an election.

“What the government should do is to provide a level-playing ground and guarantee the security of the electorate and the principal political actors in the election.

“The immunity that a president enjoys under the constitution is the same immunity being enjoyed by a state governor.

“Thus, it is an aberration to democratic norms and practices in a federal system of government that one layer of government should muscle out another government on account of political differences.

“The democracy and fundamental human rights that Nigerians enjoy today was earned at a very high price,” Atiku declared.

He warned that anything that would put democracy in jeopardy in Ekiti or anywhere else in Nigeria should be stopped forthwith.