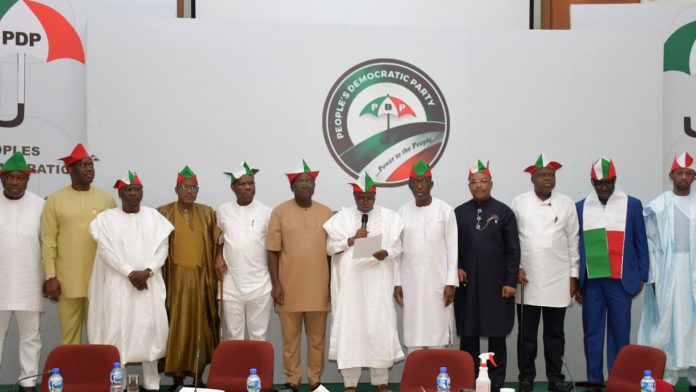 The Governors’ Forum of the Peoples Democratic Party (PDP) has condemned the Central Bank of Nigeria (CBN), Nigerian National Petroleum Corporation (NNPC) and other various government agencies for the ways they manage the country’s resources.

The CBN was criticized for operating beyond its autonomy by acting as an independent government within President Muhammadu Buhari’s administration.

The governors said the financial regulator has become a full financier of government activities rather than being a last resort, “A situation where CBN creates money, decides how much of it to spend, on what to spend it on without any form of controls or supervision is patently subversive of our constitutional order.”

The criticism of the apex bank came during the Governors’ Forum meeting in Uyo, Akwa Ibom, on June 14, 2021. The governors said the CBN has gone beyond control to the extent that the monetary authority now issues public threat to state governments

The governors in a communique issued at the end of their meeting said, “CBN has become such an octopus that it threatens State governments publicly, without decorum, about sanctions on any attempt to question its MODUS OPERANDI.”

The state governors further advised that the apex bank should take immediate steps to halt the depreciation of the Naira.

Also discussed during the meeting was the handling of funds by the NNPC, with PDP governors stating that the government-owned oil company now determines when to remit or not pay into the federation’s account.

They said the unconstitutional decision of NNPC is shortening availability of funds for state and local governments, and this is affecting their ability to create employment opportunities.

The forum, chaired by Aminu Tambuwal of Sokoto State, said it is against the letters and spirit of the 1999 Constitution for the Corporation to determine how much to spend, how to spend it and “how much to remit to the Federation Account.”

In the statement, PDP governors advised that states should now have a say in the determination of operating costs to ensure transparency and accountability among government agencies.