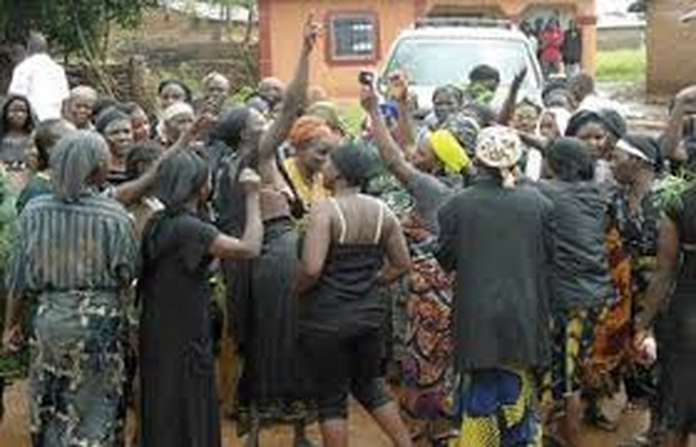 Twelve women alleged to be witches at Agobiri, Southern Ijaw, have been dragged to court for conspiring and bewitching an ongoing road construction of the Yenegoa/ Oporoma in Bayelsa.

In the two-count charges against them before the Magistrate Court, Oporoma division, the police accused the protesting women of allegedly conspiring among themselves to commit a felony with unlawful assembly and thereby committed an offence punishable under section 444(d) of the criminal code law, Cap c14 laws of Bayelsa State, 2006.

“That you(all the accused) and others at large on the same date and place in the aforesaid Magisterial district with intent to carry out a common purpose, did assemble in such a manner by blocking the ongoing Oporoma-Yenagoa road construction with sticks, plantain, juju, palm fonts, causing persons in the neighbourhood to fear and tumultuously disturb the peace of the people using access road without reasonable occasion and thereby committed an offence contrary to section 54 and punishable under section 55 of the criminal code law, Cap C14 Laws of Bayelsa State,” the charge reads.

The women who are indigenes of the Agobiri community were reportedly arrested during their protest against the alleged exclusion from the communities to benefit from the Oporoma/Yenagoa road construction project.