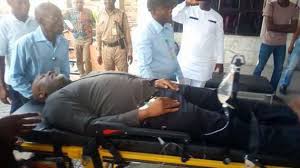 Senate President Bukola Saraki and many senators have arrived at the National Hospital Abuja to visit Sen. Dino Melaye who bailed out of a moving vehicle yesterday.

The Senate convoy arrived at the facility at 1:33pm Wednesday, meeting with the hopsital management first before moving to the ward of the National Traumatic Centre where Melaye is.
No fewer than 30 armed police officers were guarding the premises.

This appears the first official response to the senator who has been in distress since he was flagged down on his way to Morocco Monday morning.

The Senate had before now carried on like nothing was happening, especially while their colleague was sealed up in his residence for hours.

Only four senators came to witness the siege, and one of them, according to reports, went and rented a crowd of internally displaced person to protest the siege.

After a 20-hour siege on his residence, the Kogi senator surrendered to the police who had been seeking his arrest since he dismissed a summons inviting him for interrogation in a gun-running scandal he is allegedly complicit in.

On his arrest, Melaye was bundled in a car, and when it was clear the police team were taking him to Kogi to be paraded, he hurled himself out of the vehicle, sustaining some injuries.

He first checked into a private hospital before he was later moved to the government hospital.

Melaye, while under siege, had alleged there was a plot to kill him.

On the Wednesday visit, security and legislative aides who accompanied the lawmakers were prevented from entering the facility.