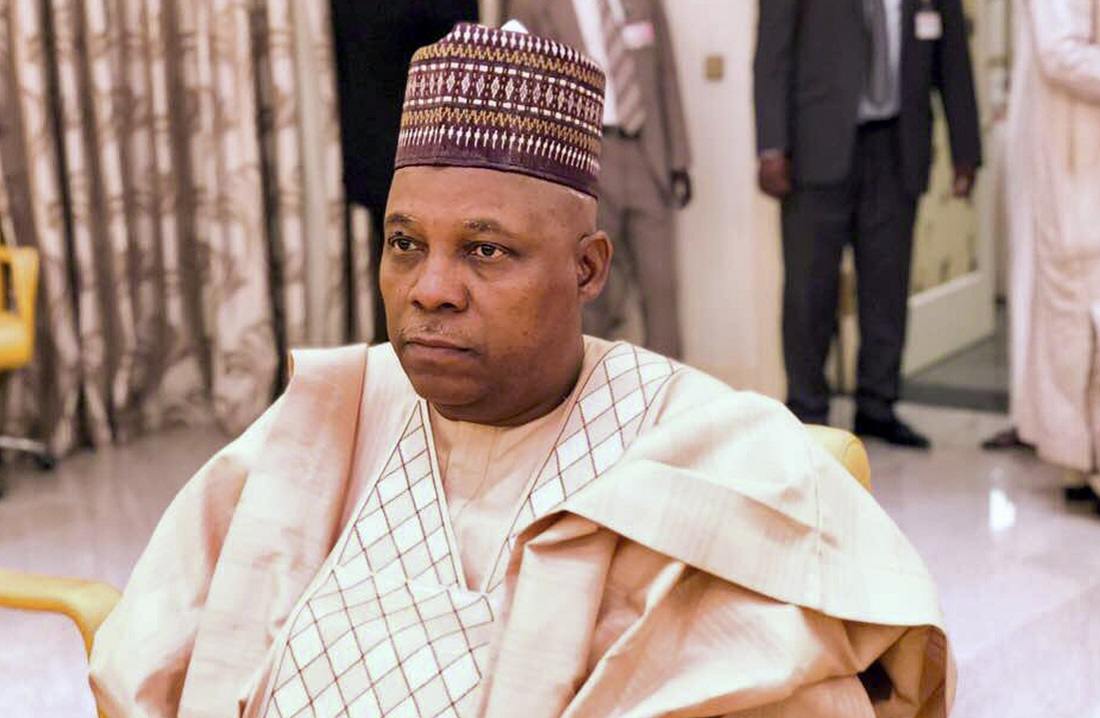 A cursory glance at recent events in the political and socio-economic life of Nigeria has laid bare, amongst a host of myriad of problems bedeviling our dear nation, how fragile and thin our unity has waned. The near-economic collapse, the bastardization of our currency, and the alarming daily exodus of Nigerians, irrespective of age to greener climes – never mind, our land is green, through any prism you choose to look at it.

However, my focus is on the misplaced challenge, that has been issued by the All-Progressives Congress vice presidential candidate, former Governor of Borno of State and now Senator, Kashim Shettima. Not sure Shettima is conversant with this quote by a Roman Philosopher that goes by the name, Marcus Tullius Cicero. He said: “A dwarf remains small even it he stands atop a mountain, but the colossal maintains his height even he stands in a well”. Such is the ridiculous scenario in focus.

In what appeared to be an unprovoked verbal vituperation against the opposition candidates notably, that of the People’s Democratic Party, the PDP, former vice president Atiku Abubakar, the Waziri of Adamawa, and that of the Labour Party candidate, former Governor of Anambra State, Peter Obi, instead of confronting and addressing the real issues dogging their fragmented Party, the APC. Even though at the moment it would seem every political party is battling with its own internal wranglings or squabbles if you like, none of the parties is blaming their problems on the other parties, except for the exceptionally deceitful entity called APC. It’s extremely ridiculous and difficult to fathom why APC is now searching for salivary amylase in the salivary glands of their opponents to grind the excessive Agbado and cassava they chose to consume. Which of the opposition parties or candidates forced their hands on the panic button?

Right from the time the whistle went off, the APC-led federal government, through their actions and inactions have no doubt given Nigerians loads of reasons to doubt their sincerity of purpose, honesty, capacity or any motivations whatsoever to convince the electorate of their readiness. What is worrisome, is that instead of embracing the realities before them, they are busy trying to divert people’s attention by issuing a half-kobo challenge on the capacity of those aspiring to relieve them of the burden of misrule and unprecedented level of incompetency and jaw-dropping propaganda.

The challenge targeted at the former vice president Atiku Abubakar, the flagbearer of the PDP, widely known as the boy from Jada, and the darling of the Talakawas, who acts rather than spew lies about who he is and what he stands for, is one that should be responded to.

No thanks to the APC for reducing a nation of well-over 200 million inhabitants in search of quality leadership to a nation of prayer warriors and miracle seekers. This is not to say that prayer is not important.

Sen. Shettima talked about the former vice president Atiku Abubakar’s achievement as vice president, and by this, he meant from 1999 -2007.

First, it would seem Shettima is completely oblivious of the Constitutional responsibilities of a vice president. He could as well ask Vice President Osinbajo, who has barely 9 months left to the expiration of his tenure, about his achievements in Ogun or Lagos States.

Shettima, and indeed, many Nigerians may recall that as at the time Nigeria transited from the military regime to a democratic rule, the nation was in dire need of a reset. A reset to relieve the country of her debt crisis, get around the agitations for the actualization of the June 12 Mandate, weak banking sector, infrastructural decay, the imbalanced composition of federal civil service and a whole lot.

The former vice president Atiku Abubakar under the leadership of his former boss had enormous responsibilities, which includes, securing for the country a debt relief that APC has now succeeded in piling up for generations yet unborn, demonstrating his detribalized nature in weaving back the torn fabric of our nation as an indivisible entity. Atiku chaired the national economic team that saw the economy work for all and not for a handful, making the country a choice destination for investors. He was the brain behind the establishment of the anti-corruption agency i.e., the Economic and Financial Crimes Commission and other key reforms that have stubbornly withstood Sen. Shettima’s Party’s efforts to bring this country to its knees. Those reforms, thankfully, have now become the shock absorber of whatever is left of this country – Most Nigerians get what shock absorber does in a car.

As a vice president of Nigeria from Adamawa State, the first thing Atiku Abubakar did for Adamawa State was to ensure justice, peace, unity and harmony in the state. How did he do that? As a governor-elect of Adamawa State, with a Christian and a youth as his deputy before he was tapped to become the vice-presidential candidate of the PDP in 1999, against all odds, and perhaps, at the detriment of his political career, sided with justice to ensure his deputy, became the governor of Adamawa State. Not only did he work to make sure justice and fairness prevailed in that circumstance, throughout his days as vice president, his governor enjoyed free hand to do as he deemed fit. The same cannot be said of Sen. Shettima who has now found his voice mainly because of the achievements of his successor, Prof. Babagana Zulum.  To demonstrate this fact, Prof. Zulum was amongst those touted for the position of vice president for his party, the APC, until the Prof. made it categorically clear that he would rather concentrate his efforts to rebuilding Borno State. Shettima bequeathed as Governor freaking 8years, and which by-the-way saw its worst days under his watch as governor. Just like President Buhari, who’s eager to quit the Villa, Sen. Shettima was also in a hurry then, to vamoose as governor to become a senator, so he could run to Abuja and leave the mess for his successor to clean. It was apparent that the problems became too heavy a burden for him, and he had run out of ideas to confront the problems arising from the menace of Boko Haram insurgency. The untold hardship on the citizens of Borno State is another kettle of fish. (May the memories of all those who lost their lives to terror of the insurgents be a blessing to us all. Amin)

Former vice president Atiku Abubakar, a man with an undeniable entrepreneurial gift, had before becoming the number 2 man in this nation built primary and secondary schools in his native Adamawa State in demonstration of his understanding of the value of education and his beliefs that education is the bedrock of any society. I am not aware of your or your new boss’s achievements in this regard. And unless you’re not properly informed, former vice president Atiku Abubakar is the second largest employer of labour in the entire Adamawa State. Does Sen. Shettima get what this means? Doubtful! It means availability of job opportunities for the people of Adamawa and her neighboring states like Borno State. Little wonder, Adamawa State is not a breeding ground for terrorists’ recruitment activities. The same cannot be said of Borno State, with many riches littered all over the state, but none to create jobs opportunities for her teeming youth population.

Let me also help him with some of the former vice president’s achievements targeted at liberating his state from untold hardship. The plastic company, Adama Beverages, Rico Gado Animal Feeds, Faro Water Company, the ABTi Academy, the American University of Nigeria, Yola, with countless number of persons enjoying scholarship, Atiku Farms, a fire Service at the disposal of the people of Adamawa State, Gotel Radio and Television Station, the micro-finance institution women enjoy, etc. What are Shettima’s strides in this regard as Governor of Borno State? Hey, in spite of all these, the Waziri of Adamawa does not enjoy proceeds from the State government by way of Tolling their roads. Nor is he collecting taxes and sharing same with the Government of Adamawa State. I hope he catches my drift. If he doesn’t, which I doubt, Lagosians certainly do. Per happenstance, Shettima finds himself in Adamawa State, for whatever reason, he should find time to go round and see for himself, Atiku’s footprints. This, he could do without moving a battalion for security cover. Seeing is believing.

Just like the saying ”real men don’t kiss and tell’. Atiku Abubakar does not display his generosity under the spotlight of cameramen and journalists. For this reason, I will not delve into his philanthropic activities. I hope as a Muslim, Shettima understands that.

Sen. Shettima sought to know those who the former vice president has mentored. Sen. Shettima, do you know the brain behind the infiltration of technocrats into the Obj/Atiku government? The answer is, Atiku Abubakar. His mentees are too numerous to mention. All Shettima needs to do is to look around him.

But for the avoidance of doubt, vice president Atiku Abubakar is widely known as a talent hunter. As vice president he was responsible for bringing proven technocrats into the government. The emergence of Charles Chukwuma Soludo, Ngozi Okonjo-Iweala, Nasiru El-Rufa’i, Nuhu Ribadu to mention but a few were all Atiku’s handwork. What is your boss, Asiwaju Bola Ahmed Tinubu known for? The same way you now find comfort and a hiding place in your successor’s achievements. Asiwaju is no different. Lagos under his watch as Governor was a harbinger for thugs and thuggery activities. It’s high time APC knew Nigerians are too much for this impertinence.

On the line the forthcoming election, is the scorecard of the APC led administration and the journey to the island of relevancy (Aso Rock Villa), is one that should be paved with unquestionable and verifiable requisite antecedents either as an administrator and/or leader. Which of these can you honestly claim to possess? In truth, none!

The only thing Nigerians desperately beg for, is credible and violent-free polls.