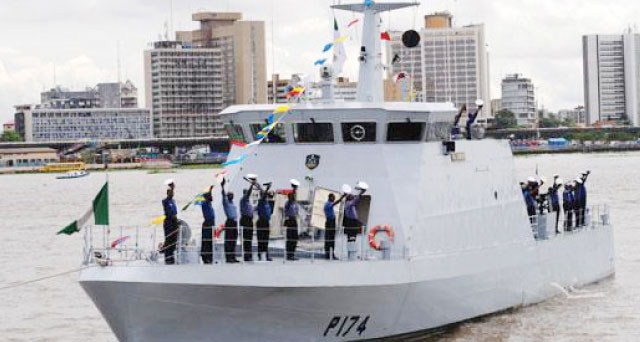 Men of the Nigerian Navy Ship (NNS) BEECROFT in Apapa on Monday handed over a recovered service AK 47A rifle snatched from some policemen by hoodlums in Lagos.

The rifle numbered: 22690 was snatched about 4am from four policemen on March 19 while on a routine patrol in the Ijora area of the state.

While the four hoodlums were been pursued, they threw the rifle under an abandoned vehicle around Marine Beach.

Fortunately, it was gathered, a Vulcanizer identified as Banjo Adeboye, found the rifle the following morning at his shop and immediately drew the attention of the Naval Taskforce deployed to the area.

The naval officers retrieved the rifle and brought it to the Nigerian Navy Ship (NNS) BEECROFT’s base in Apapa.

Handing over the rifle to policemen from the Ijora Division armoury, the Commander, NNS BEECROFT, Commodore Abraham Adaji said the rifle had 30 rounds of 7.62mm live ammunition.

He stated that upon receipt, the navy discovered that it had police markings all over it and had to contact the police.

“In the course of our investigation, we got information that some hoodlums attacked a police patrol vehicle on March 19 and snatched the rifle from them. The policemen had to pursue the hoodlums and in the process, they threw the rifle under one abandoned vehicle but the manhunt for them continued.

“As I speak with you, the rifle has been recovered and some of the men involved in the incidence have been arrested. What we have done is a formal handover of the rifle to its owners-the armoury of the Nigeria Police- after they have presented evidence that substantiated the navy’s investigation.

“The rifle was found by a Vulcanizer near his place of work. He just came across the rifle and immediately alerted naval men in the area that were on duty in the area.

“We are delighted we have Nigerians that are not only patriotic but also security conscious. The havoc that rifle would have caused in wrong hands can best be imagined,” he said.

Meanwhile, it was gathered that two of the suspected hoodlums have been arrested by the police and efforts were on to nab the others still at large.