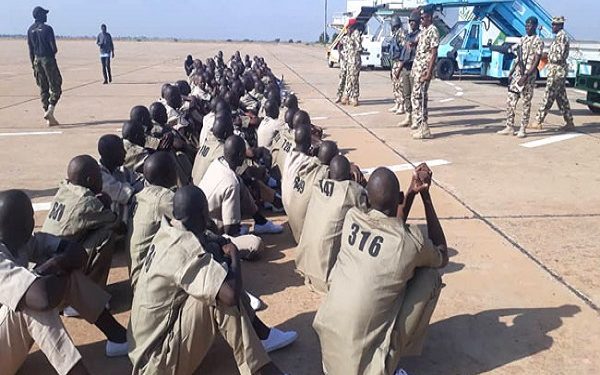 The population of children that followed their parents out of the Sambisa forest to surrender to Operation Safe Corridor doubles their parents’.

No fewer than 13,243 terrorists and their families have so far surrendered to troops in the north east.

The acting Director, Defence Media Operations, Brig.-Gen. Bernard Onyeuko, disclosed this while giving an update on military operations across the country on Thursday in Abuja.

According to Onyeuko, the surrendered terrorists comprise 3,243 males, 3,868 females and 6,234 children.

The number of the dependent probably indicates more children were produced by the terrorists—either as a strategy or call of nature.

The defence headquarters is however more concerned about the recapitulation as the outcome of successful counterinsurgency operations.

Onyeuko said the troops of Operation Hadin Kai had sustained aggressive posture with vigour in the North East, which had yielded significant results, including degrading the capabilities of the terrorists, in the last two weeks.

He said several other insurgents were arrested alongside their informants and logistics suppliers, and more terrorists had continued to lay down their arms and surrender to the troops with their families.

“Some of these feats were recorded at Gwoza – Yamtake – Bita road, Gwoza – Farm Centre – Yamtake road, Mandara Mountain area as well as Pulka and Hambagda towns, all in Borno State.

“Cumulatively, within the period, a total of 29 terrorists were neutralised and 13 terrorists including their informants/collaborators and logistics suppliers were arrested in the course of the operations.

“Additionally, a total of 38 assorted weapons and 968 rounds of assorted ammunition as well as 48 rustled livestock among several other items were recovered.

“So far, a total of 13,243 terrorists and their families comprising 3,243 males, 3,868 females and 6,234 children, have surrendered to troops at different locations in the North East,” NAN quoted him as saying.