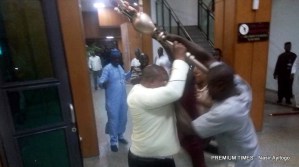 The Senate plenary eneded in pandemonium on Wenesday after suspected thugs invaded the chamber, grabbed the mace, and took off .
The smach-and-grab happened seconds after Delta Sen. Ovie Omo-Agege entered the chamber.
About 10 men following the senator forcibly entered the chamber, and, after nabbing the mace, they ran out, and piled into a waiting black SUV that immediately zoomed off.
One of the security men at the entrance of the National Assembly said the thugs told him and other officers they were with the Omo-Agege.
The sentaors are now in executive session, without the mace, the Senate symbol of authority.
The Senate has since accused Omo-Agege of leading hoodlums to seize the mace.
The pro-Buhari senator was suspneded for 90 legislative days for speaking in favour of President Muhammadu Buhari who vetoed the Senate amendment to the Electoral Act 2010 that re-ordered the election dates.
The case is in court.
The Senate, including Senate President Bukola Saraki are expected to open their defence in the suit Omo-Agege filed when the Senate ethic committee were probing his pro-Buhati comment.
Senate spokesperson Sabi Abdullahi said the incident is an act of treason.

Share this on WhatsApp
Related Topics:maceOmo-Agegepro-Buhari senatorSenateSenate President Bukola Saraki
Up Next

NASS orders IGP, Daura to bring back mace in 24hrs