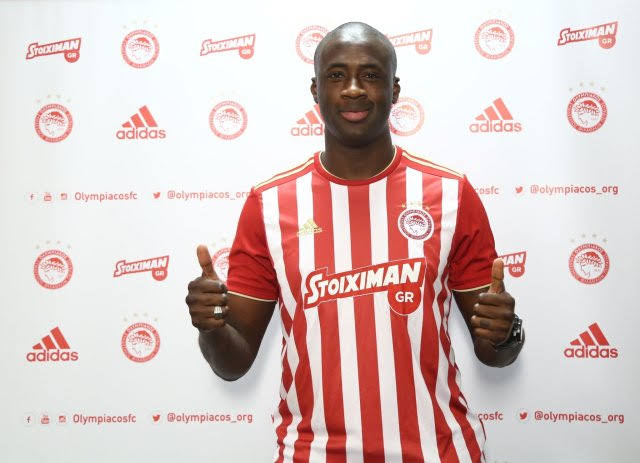 Former Manchester City midfielder Yaya Toure was presented to Olympiakos fans after finalising a return to the club.
Toure, who left the Greek side in 2006, was a free agent having left City this summer after eight years at the club.

Olympiakos fans lit flares and mobbed the 35-year-old when he arrived, and he went on the pitch after their 5-0 win over PAS Giannina on Sunday.
“I made my decision based on the special relationship I have with this incredible club,” said Toure.
“It is an honour to be back. When I left in 2006 I said I would come back and I am delighted to keep my word. I had offers from lots of clubs across Europe, Asia and the USA.
“I am as hungry for success now as I was when I first arrived here many years ago and I cannot wait to help the club win the trophies the great fans of Olympiakos deserve.
“It is now time to let my football do the talking once again.”
The Ivory Coast international helped Olympiakos to a domestic double before leaving after one season to join Monaco 12 years ago.
He joined Barcelona in 2007 before moving to Manchester City in 2010, where he won the Premier League three times.
Olympiakos have not yet released any details about the length of his deal but welcomed the Ivorian on their social media channels.
Toure was also pictured in club colours and met owner Evangelos Marinakis – who also holds a majority stake in Nottingham Forest – on Sunday.
Olympiakos finished third in the Greek Super League last season behind PAOK and champions AEK Athens.

Share this on WhatsApp
Related Topics:OlympiakosYaya Toure
Up Next

Mancini: They are not enough Italian players