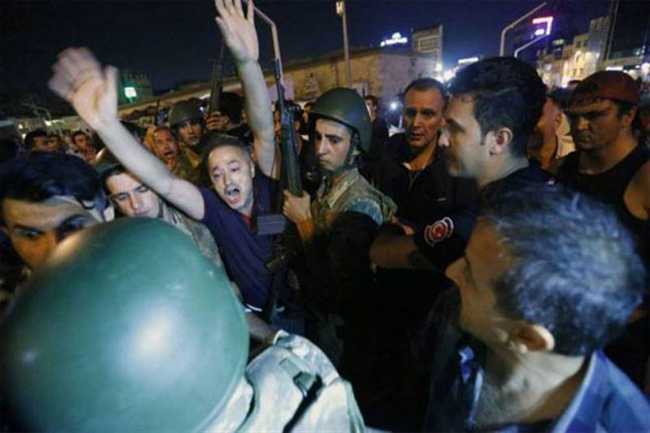 The interior ministry said 8,777 people had been removed from their posts, including 7,899 members of the police and security forces, the state-run Anadolu news agency reported on Monday.

Erdogan has pledged that the “cleansing” of state institutions will continue, saying a cancer had spread like a “virus” and needed to be eradicated.

Speaking to supporters on Sunday after attending funerals of civilians killed in the violence, Erdogan also said his government would consider reinstating the death penalty, which Turkey abolished in 2004 as part of reforms aimed at joining the European Union.

Prime Minister Binali Yildirim said on Monday that more than 7,500 suspects had been detained in connection with the coup attempt.

“So far 7,543 suspects have been detained. The numbers may change. It includes 100 police, 6,038 soldiers, 755 judges and prosecutors and 650 civilians,” Yildirim said, adding that 316 of the detainees had been remanded in custody.

The detained suspected military coup plotters included 103 generals and admirals, state media said, while nearly 3,000 judges and prosecutors were dismissed in the wake of the weekend’s events.

Separately, 30 governors and more than 50 high-ranking civil servants were also removed from their posts on Monday, according to local media.

“The government’s response to the failed coup is widening,” Al Jazeera’s Zeina Khodr, reporting from the capital, Ankara, said.

“At the beginning it was army officers – the rank and file, as well as generals who were detained; then it was judges and the judiciary, including the Constitutional Court and Supreme Court; and now the policemen,” Khodr said.

“It seems the government doesn’t want to take any chances.”

The swift rounding-up of judges and armed forces, as well as the dismissal of police, came under fire in Brussels, with EU officials calling on the Turkish government to respect the rule of law.

Punishment against the coup plotters must not include “measures that could lead to an authoritarian state”, French Foreign Minister Jean-Marc Ayrault told journalists on Monday.

His view was echoed by Johannes Hahn, the European commissioner dealing with Turkey’s EU membership bid, who expressed concerns that the Turkish government was exploiting the failed coup to target internal opponents.

“It looks at least as if something has been prepared. The lists are available, which indicates it was prepared and to be used at a certain stage,” Hahn said on Monday.

“I’m very concerned. It is exactly what we feared.”

Inside Turkey, the main opposition Republican People’s Party (CHP) also said the response must be conducted within the rule of law, adding that the plotters and those who helped them must be tried in the courts.

In a statement on Monday, the CHP also said the military must not be portrayed as the enemy.

The coup attempt became apparent late on Friday when, in dramatic scenes, tanks blocked bridges in Istanbul, jets were seen in the skies over at least two cities, and the parliament and the headquarters of the intelligence services were strafed with gunfire from attack helicopters.

Giving new figures, Yildirim said on Monday that 208 people were killed by the coup bid, including 145 civilians, 60 police and three soldiers. And 1,491 were wounded, he added.

Erdogan has blamed a high-profile former ally who has since become a bitter rival, Fethullah Gulen, for the attempt.

Gulen, who lives in exile in the US state of Pennsylvania, has denied any involvement. Turkey is expected to officially seek his extradition.

US Secretary of State John Kerry said he had no evidence that Gulen was behind the plot and urged Turkish authorities to compile evidence as quickly as possible so the US could decide whether Gulen should be sent back to Turkey.