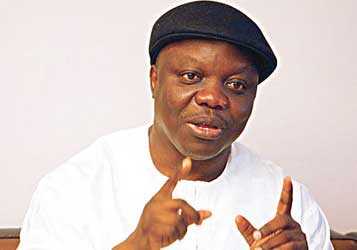 The immediate past governor of Delta State, Dr. Emmanuel Uduaghan, has warned of inciteful statements by leaders and members of the People Democratic Party (PDP) ahead of the 2023 governorship election in the state.

Uduaghan appealed to party faithful to be mindful of statements capable of polarizing and jeopardizing the chances of the party in the forthcoming elections.

The former governor spoke when he met with leaders and members of the Peoples Democratic Party (PDP) in Delta South Senatorial District in Warri on Saturday.

Present at the meeting were the Deputy Governor of Delta, Deacon Kingsley Otuaro, Senator James Manager and other leaders including serving Delta State House of Assembly members, council chairmen and former commissioners in the state from the district.

READ ALSO: Inside the mind of a Lagos miscreant

Uduaghan, during the meeting held at the Government House Annex, Edjeba, told party faithful that even as the race of the 2023 governorship election begins, the party must be united from all fronts.

He stated that whoever will succeed Governor Ifeanyi Okowa had been ordained by God and charged members to work for the unity and progress of the party.

“Some of you may have noticed in the last few weeks, pronouncements are being made, that bothers on hate speeches by members of this party. Let us minimize hate speeches.

“Who will be governor will be; who will be senator will be senator; who will be in the House of Reps, will be there. How God will do it, you will not know. Don’t think you can force yourself into any position. I am telling you not because I like talking, but I am talking from experience. Who will be, will be!” he stated.

Uduaghan further appealed members of the party with political ambition to seek the party’s ticket through peaceful process rather than creating division two ahead of the exercise.

“Let us not create enmity because of an election that will not happen this year; let us try to actualize our ambitions in peace. Please, I want to appeal that in our ambitions, we should be careful in what we say, how we act and carry ourselves.

“I have managed crises before I became governor and while I was a governor. As a governor, I had to put my hands up in the river, when soldiers pointed AK47 at me. I couldn’t go with security. I am worried about the crisis and I pray we do not have any”, Uduaghan added.

Also speaking, the Deputy Governor of the state, Deacon Kingsley Otuaro, emphasized the need for party members to exercise “decorum” as the party prepares for the 2023 elections.