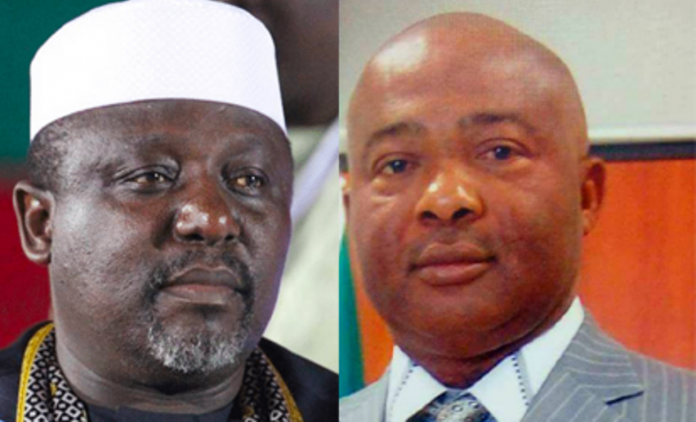 The incident in Imo State on Sunday when the Police invaded St. Peter’s Anglican Church, Eziama-Obaire, Nkwerre Local Government Area, Imo State, to arrest the son-in-law of former Governor Rochas Okorocha of Imo State, Uche Nwosu, has generated insinuations of the political war between Okorocha and Governor Hope Uzodinma being extended to the family of the former governor.

A detachment of police officers had invaded the church, shooting sporadically into the air in their operation to arrest Uche Nwosu, who was eventually taken away during the outing service of his late mother who was buried on Wednesday 22nd December 2021.

The initial apprehension in the community was that gunmen invaded the church and kidnapped Uche Nwosu, a former governorship candidate in the 2019 elections. However, the police later owned up responsibility for the operations, acknowledging in a statement that Nwosu was arrested and not kidnapped.

The Police Public Relations Officers of the Imo State Command, Michael Abattam, in a statement declared: “This is to inform the general public that chief Uche Nwosu was not kidnapped but was arrested by the police and Imo State Police Command is aware of the arrest and presently he is in police custody.

“This is to refute the earlier news that has been making rounds on social media that he was kidnapped by unknown persons/gunmen.”

Former Governor Okorocha, representing Imo West senatorial district in the National Assembly, at a media briefing in Owerri, insisted that the arrest was an attack on his family, saying that it was a political battle taken too far.

“This is one arrest too many as it relates to me and my family members.

“There was just no justifiable reason for the police to have gone into a church to carry out such a shooting exercise.

“Even the security attached to my family could not [do anything] because they identified the policemen.

Former Governor Okorocha raised an alarm that the Imo State government is conniving with security operatives to harass his family members without a just course.

Okorocha argued that arresting his son-in-law was unnecessary, noting that Nwosu was never invited by the police, nor was there any warrant of arrest.

Okorocha declared: “There was no single arrest warrant on Uche Nwosu; nothing at all. It was like a kidnap… if not for the fact that we have confirmed that it was the police, the initial fear was that these were gunmen that had come to kill Uche Nwosu.”

The Imo State government, in defence of Uzodinma, fired back at Okorocha.

The Commissioner for Information and Strategy, Declan Emelumba, in a media interaction, declared: “Uche Nwosu is just an indigene of Imo State and a citizen of Nigeria, and if he has run afoul of the law, the police have every right to arrest him, and nobody should dictate to them how they do it.

Emelumba argued: “What is painful is that a former governor of this state, Rochas Okorocha, is busy raining abuses on His Excellency, Governor of Imo State [Hope Uzodinma], and saying all manner of things about him…”

Former Governor Okorocha was earlier in the year arrested by the police over allegations of trespass. The former governor had visited one of his properties which the Imo State government confiscated by fiat and was arrested within the vicinity by the police for trespassing.