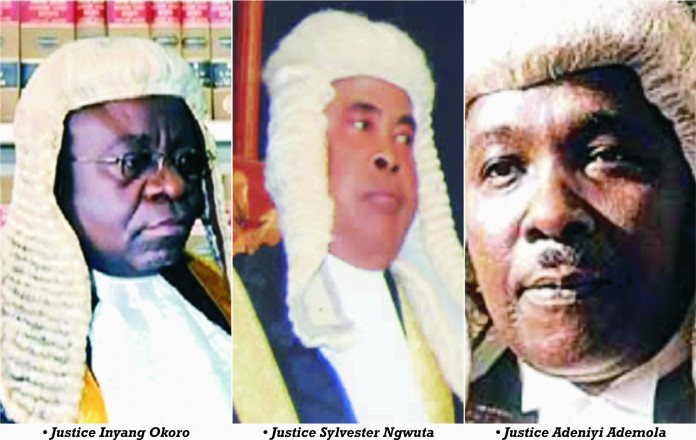 It doesn’t take eternity to quantify how much Nigerians are paying to keep their filthy third arm of government. But the social and psychological cost of a plague such as corruption in the judiciary may take forever to reconcile.

INTERNATIONAL human rights lawyer and activist, Kolawole Olaniyan recently notes in his book: ‘Corruption and Human Rights Law in Africa’ that corruption sires a multitude of human rights infractions and in Nigeria’s temple of justice, such sins can include a ruthless subversion of access to fair trials , basic freedoms and human rights remedies for justice seekers. It’s no surprise then that the National Judicial Council [NJC] suddenly let go off its sense of morality and simply went ballistic over the sting operations of the DSS on the homes of their kindreds between 7-8 October, 2016.

Just imagine sharing N33.47 billion among 934 lucky civil servants over a 12-month period. That will simply come to N3 million each per month for each of the individuals, or N36 million cool cash at the end of twelve months –well enough to immune any lucky earner from the debilitating recession that is spiking the temperature of a vast majority of ordinary Nigerians at the moment.

Maybe not evenly distributed, as a matter of fact, but based rather on hierarchy, still, that’s how much of tax payers’ money the Chief Justice of Nigeria (CJN) and his kindred spirits, 934 of them put together, at the federal and state judiciary wolf down in salaries and other allowances over twelve months just to keep them banging the gavel in their various courtrooms. And the list of beneficiaries also include the likes of Supreme Court Justices Sylvester Ngwuta and Inyang Okoro; Presiding Justice of the Court of Appeal, Ilorin Division, Justice Mohammed Ladan Tsamiya; Justice Adeniyi Ademola (Federal High Court, Abuja); the Chief Judge of Enugu State, Justice I. A. Umezulike; Justice Kabiru Auta of Kano State High Court; and Justice Muazu Pindiga (Gombe State High Court)–all of who ran out of a water-tight alibi to explain how they came about the $800,000 the DSS says it found in their closets weeks back during an unanounced raid.

For being Justices of the Supreme Court and President of the Court of Appeal at any rate, the trio of Sylvester Ngwuta, Inyang Okoro and Mohammed Ladan Tsamiya take home the same annual salary of N2.47 million each, while Justices Adeniyi Ademola, I. A. Umezulike, Kabiru Auta and Muazu Pindiga all have N1.80 million each as annual salary.

Never mind that a vast majority of tax payers in the public service are owed arrears of salaries running into several months really, Nigerians have always pampered their judges rotten like some demi-gods. And the reason for that is not too far to seek. Chairman of the Presidential Advisory Committee Against Corruption [PACAC], Itse Sagay says the judiciary is “the only arm of government that has the power of life and death over Nigerians”. So Nigerians have got no choice really, but to lavish their lean reserve on the judges, less they get it from somewhere else.

“This is because at the end of the day, when there is corruption, who do they take the matter to, to the judge? The judge is the ultimate and if the buck stops at his table and that judge is complicit in corruption, then, that is the end of the fight against corruption. That is how awful it is…”

It’s almost impossible to fault Sagays’s claim. Lagos-based transparency agency, the Independent Advocacy Project [IAP] expressed the same sentiments way back in 2006. As part of its Judiciary Watch Project then, the group pulled a nationwide media stunt asking for more remuneration, promotion and security of tenure for judicial officers in Nigeria as means of making corruption unattractive to their Lordship. The recommendations, published in a report entitled “Nigeria: The Bench and the Challenge of Corruption” indicate that:

“To minimise corruption in the judiciary, judges must have security of tenure to ensure that judges are not arbitrarily removed or dismissed from office.

“Judicial officers should be better remunerated as poor wages have in the past proved to be an inducement to be corrupt.”

The group’s advocacy intervention paid off culminating in a 150 percent pay rise for judicial officers shortly after then. But not until it was crystal clear to the public that the Bench was reeling under a transparency deficit.

Justice Wilson Egbo-Egbo, formerly of the Federal High Court, Abuja was emblematic of the rot in that era. The celebrated legislature-judiciary stand-off between him and former Senate President, Anyim Pius Anyim; the controversial Abia South Senatorial District election result contest between another former Senate President, Adolphus Wabara and Elder Imo and the 2003 injunction directing Chris Ngige to stop parading himself as the governor of Anambra State, stick out like a sore thumb on Egbo-Egbo’s name.

He was subsequently suspended by the NJC, and later retired in January 2004.
Justice Stanley Nnaji of the Enugu State High Court was also dismissed on the recommendation of the NJC for wrongly assuming jurisdiction in a matter outside his state.

The judge had ordered another crooked law enforcement officer, Tafa Balogun, then inspector-general of police, to dislodge Chris Ngige from the Anambra State Government House. After an investigation of the alleged misconduct of the judge in his handling of the suit filed by an Anambra State lawmaker, Nelson Achukwu, the NJC recommended that the judge be sacked.

In May 2007 too, the Lagos State Government, unable to manage its frustration again, went on to terminate the appointments of three Judges and 22 magistrates in the state on account of corrupt practices. Several other judges and magistrates were also eased out of the state judiciary for similar offences.

“This is part of efforts by the state government to address the problem of corruption in its judicial system,’ Vice President Yemi Osinbajo, who was then Attorney-General and Commissioner for Justice in the state noted.

A Slap on the Wrist
It has always been a history of soft landing for crooked judges, the worst being outright dismissal and premature retirement, however heinous their crimes. The NJC hardly make attempts to offer erring kindreds up for prosecution unlike what obtain in both the Executive and Legislative arms.

Nigerians too, largely ignorant and ill-equipped to raise critical questions about the workings of their judiciary, have all along make their judges believe they are above queries and prosecution when they ere in law. The scandal that spawned from the action of a former Chief Justice of Nigeria who attempted to stand the Constitution on its head by unilaterally elevating a sitting President of the Court of Appeal to the Supreme Court is a case in point. Up till date, nothing happened in the issue involving former CJN, Justice Aloysius Katsina-Alu, who the erstwhile PCA, Justice Ayo Salami, accused of handing him a “greek gift”.

So it was no surprise when Justice Egbo-Egbo, shortly after he was eased out of the judiciary, attributed his retirement to some kind of miracle. Well, that weird miracle also played up in the case of Justice Idenyi Uloko in 2013. Ten years after being sacked from the judiciary, the ex-Chief Judge of Plateau State surfaced on the list of Nigerians awarded national honors by former President Goodluck Jonathan.

In 2002, Justice Uloko was one of six serving judges indicted for some dishonourable acts and given the boot from the judiciary on the recommendation of a panel headed by late Justice Kayode Esho. The panel particularly recommended Mr. Uloko’s sack on the grounds of gross misconduct and abuse of office.

Not only did he bag the award of Officer of the Order of Niger, Mr. Uloko also got appointed as the chief commissioner of the Public Complaints Commission, Abuja.

A Constitutional Entrapment
Under the 1999 Constitution, the power of NJC to initiate disciplinary action against an erring judicial officer must be in accordance with the Code of Conduct and Rules for the discipline of judicial officers, which stipulates that such process cannot commence without a petition received from a person complaining against the conduct of a judicial officer.

Where the allegation is proved against the judicial officer, 3rd Schedule to the 1999 Constitution Part 1 item 21(b) provides for the NJC to recommend to the president or governor as the case may be, such judicial officer for removal.

And where such judicial officer is the head of any court, for instance, the Chief Justice of Nigeria or Chief Judge of the state, Sections 266(1) & 271(1) says the President or the Governor as the case may be may not be able to remove him except on the address of the senate or the house of assembly with two thirds majority votes of members.

In the subsisting constitutional contraption, the NJC is at best a toothless canine. Its disciplinary control exercised over judicial officers does not include prosecution of such officers. Nor can the council remove a judicial officer from office except only by recommending such removal.

So it’s just like treating judicial corruption with a kid glove. And the spin-off of such a sick joke is not lost on Itse Sagay for one. In fact, the Senior Advocate of Nigeria is not done going about adumbrating what Nigerians stand to lose if they allow the judiciary to continue to rot away with its cancer.

“We need the judiciary; but we need an upright judiciary. Without that, all arms of government will collapse, democracy will collapse…”

That sounds like some doomsaying really morbid enough to further ramp up the blood pressure of the already jaded poor Nigerians who have all along been the victims each time those crooked judges let a corrupt politician ride roughshod over them, or let a pension thief off the hook of law through some constitutional manipulations.