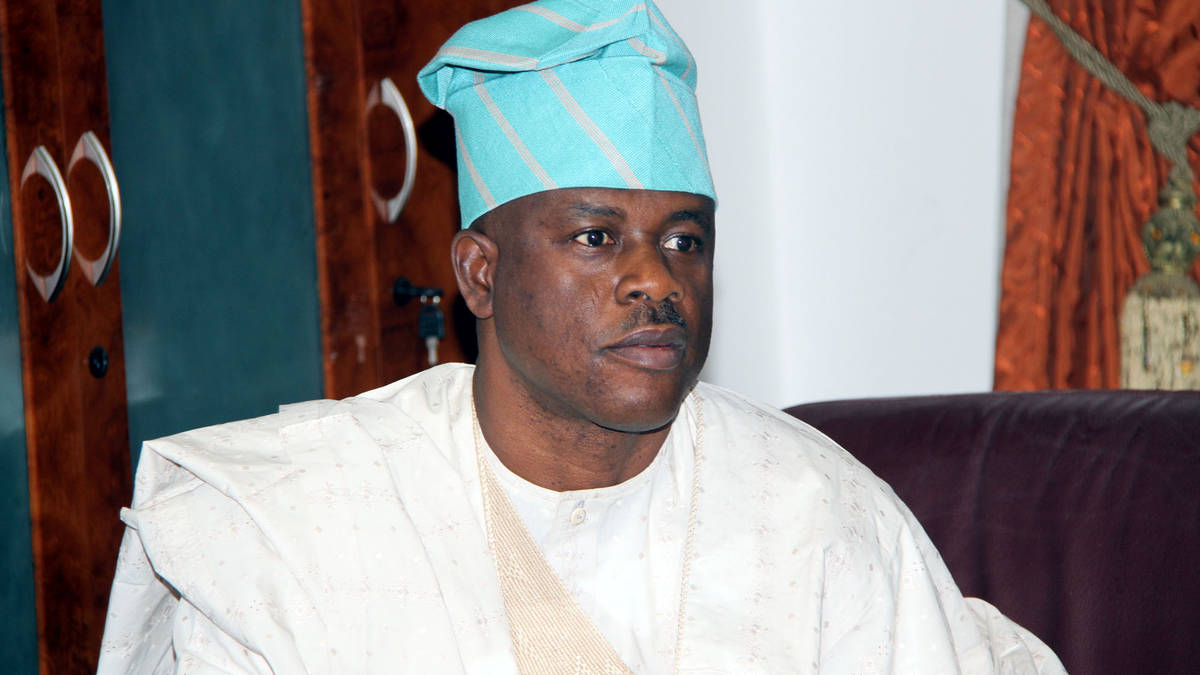 Share this on WhatsApp
Spread the love
Musliu Obanokoro, former Minister of State for Defence in the last PDP administration, has finally defected to the ruling APC following months of preparation.
The PDP stalwart ate the frog, and hopped in on Saturday in Lagos at his constituency on Lagos Island.
Rumours have it that he made the move after reconciling with the APC leader Bola Tinubu whom, many believed, he used the federal might to persecute in the run-up to the 2015 elections.
Obanikoro lost power as soon as his party flunked the 2015 elections. He ran to the US to avoid arrest after he was named in a string of corruption allegations, including the $2.1 billion arms vote scandal and the bribery of the military on duty in the 2014 guber election the PDP won in Ekiti.
He, however, turned himself in after boasting he is a US citizen and the APC government would not arrest am American. He pleaded out with the EFCC, and was later released after returning some of the millions he allegedly stole,
The former senator hinted of his defection during a television interview on Thursday.
Following Obanokoro to the party are other stalwarts from the opposition, including Modupe Sasore, who also served as aide to former President Goodluck Jonathan, Jide Damazio and Kola Balogun.
Welcoming them to the APC were the state chairman, Henry Ajomale; Kashim Imam, James Odunbaku as well as the Attorney General of Lagos State Adeniji Kazeem who represented Gov. Akinwunmi Ambode.
Past and serving members of the National Assembly including Sen. Ganiyu Solomon, Sen. Gbenga Ashafa and Rep. Jide Jimoh were among those present.
Ajomale said the coming of the former minister and others means the opposition is totally dead in the state.
According to him, Obanikoro is politically experienced and sagacious, and his joining the party will add to the fortune of the party in Lagos.
“We are happy to receive Obanikoro back in our fold. He was with us when we started the Alliance for Democracy (AD) but he decided to go the other way.
“Thank God he has realised his mistake and he is back. We are indeed happy to get back
this big fish, along with others.
“Obanikoro is an asset and he will no doubt add value to our party,’’ he said.
Obanikoro, in his speech, said he was happy to return to the fold of his age-long political associates after his long sojourn in the PDP.
He said he defected because he couldn’t find fulfillment in the PDP and he joined the ruling party because he had a mission to render service on its platform.
The ex-minister said his former party could not offer him the platform for the kind of service he wanted to render.
“Today, I and others are not just joining the APC for joining sake, we are joining because we are on a mission.
“I had joined the PDP a few years ago with the hope that certain things would be done right to enable me make the desired impact. That did not happen.
“And now, Asiwaju Tinubu has taken leadership to another level, not only in the state, but at the national level.
“So, my joining the APC is not by accident. It is to return to my people and seek a platform on which I can render service to my people, because leadership is about service and co-ordination of talents to achieve results.
“We have looked everywhere, and the only party that offers that platform for service delivery is the APC.
“For me, this is not really a defection; it is a home-coming, because in a way, this is my root. I am happy to return to my people; no place like home,” he said.
Obanikoro praised the leadership style of Tinubu, which he said had ensured the development of the state.
ALSO SEE: APC’s implosion imminent
He thanked Tinubu for being magnanimous to accept him back in the fold after years of altercations between them.
“I thank Tinubu for his magnanimity. I am here because he is generous and has a forgiving heart. If it were other leaders, they will say ‘God forbid’.
“He has accepted me back despite all the issues between us, I am grateful to him,” Obanikoro said.
The former minister said he we would do his best to add value to his new party.
Also, Sasore and Balogun took turns to thank the party for allowing them into the fold.
They said they could not find fulfillment in PDP hence, the decision to join APC.
The duo promised to do their best to ensure APC progresses in the state.
Imam, in his remark, said the party was happy to receive Obanikoro and others.
He said the defection meant the party was the only party in the state, as it marked the end of PDP.
The National Vice-Chairman of the APC (South West) Puis Akinyelure, who represented Tinubu, said the party was glad Obanikoro and others came back home.
Share this on WhatsApp
Related Topics:All Progressives Congress (APC)Decampformer Minister of State for DefenceMusliu ObanokoroPeoples Democracy Party (PDP)
Up Next

What the sauciest of Buhari’s media aides says about Atiku