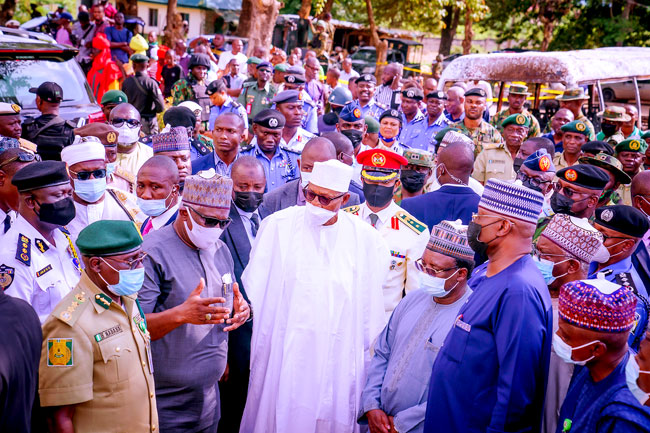 President Muhammadu Buhari in the course of the week summoned emergency National Security Council meeting to deliberate on nation’s security challenges occasioned by the recent attacks by terrorist groups.

The security meeting was attended by Vice-President Yemi Osinbajo, some cabinet ministers and all security and service chiefs.

Secretary to the Government of the Federation, Boss Mustapha, Chief of Staff to the President, Prof. Ibrahim Gambari also attended the meeting.

The Chief of Naval Staff, Vice Admiral Awwal Gambo, was represented at the meeting.

Reacting to the attack on the convoy of cars carrying the advance team of security guards, protocol and media officers ahead of Buhari’s trip to Daura for Sallah, Presidency described the incident as “sad and unwelcome”.

The President on July 6, visited the Medium Security Custodial Centre, Kuje attacked by terrorists, where he expressed disappointment with the nation’s intelligence system.

He said: “I am disappointed with the intelligence system. How can terrorists organise, have weapons, attack a security installation and get away with it?”

The president later on Wednesday departed for Dakar, Senegal, where he participated in the inauguration of “the largest financial package” of 93 billion dollars ever mobilised in the history of the International Development Association (IDA).

The IDA fund is geared toward “robust and resilient economy for Africa.”

Earlier before departing for Dakar, the president had sworn in seven new Ministers, who are also members of the Federal Executive Council.

Speaking at the swearing-in ceremony, which preceded the virtual Federal Executive Council (FEC) meeting, the president also announced the reassignment of portfolios in his cabinet.

According to him, the new redeployment is aimed at reinvigorating certain sectors where the government desires to accomplish improved results, saying his administration is now on the home-stretch of its second term, more work still needed to be done in diverse areas of the economy and national life.

The FEC meeting also approved N22 billion for the construction of a conference hostel facility for the Nigeria Content Development and Monitoring Board.

The facility is to be located opposite the National Content building in Yenegoa, capital of Bayelsa.

Buhari also presented flag to the All Progressives Congress (APC) candidate in the upcoming elections in Osun, Gov. Adegboyega Oyetola, immediately after the FEC meeting.

He assured that the party was committed to furthering the development journey of the state.

The president, who made ceremonial presentation in the State House, Abuja, on Wednesday, commended the performance of Oyetola.

The president concluded the week with a trip to his home town, Daura, Katsina State, to celebrate the Eid-el-Kabir festival.

In his Sallah message on July 8, Buhari again reassured that his administration would continue to address the current security challenges and costs of living in the country, saying ”I won’t rest until I bring relief to Nigerians.”

“I am quite aware of the difficulties people are facing and working to resolve them,” the president added.

He, however, urged Nigerians to put the interest of the country above selfish interests and “use religion as a motivation for the love of our common humanity.”

While in Daura, the president joined hundreds of Muslim faithful in observing the Eid prayer, and later hosted members of the National Youth Service Corps serving in his country home, Daura, Katsina State on Saturday.

The president donated two bulls, 10 rams and N1 million to the corps members for the celebration.

Health workers union threatens to embark on strike in solidarity with ASUU, others