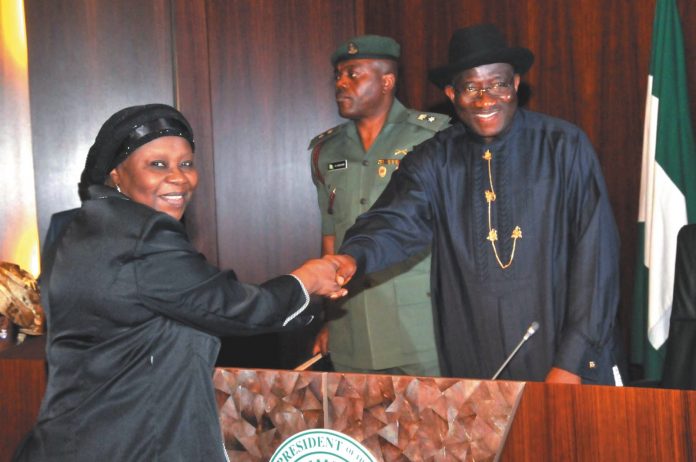 With a three-pager she sent to then President Goodluck Jonathan through his Attorney General, Mohammed Adoke, Olotu was frozen out of the judiciary–untimely.

A court exhibit reveals that Mukhtar wrote in a letter dated 28th February, 2014 to President Jonathan that-
“The Committee found the conduct of Hon Justice G K Olotu in aforestated matters as serious misconduct. His Lordship’s conduct contravened the provisions of the 1999 Constitution of the Federal Republic of Nigeria as amended and Code of Conduct for Judicial Officers as well as her oath of office.

Consequently, Council, in the exercise of its powers under paragraph 21(b) of Part 1 of the Third Schedule of the 1999 Constitution of the Federal Republic of Nigeria, as amended, decided to recommend to Your Excellency the compulsory retirement of Hon. Justice G.K Olotu from office for gross misconduct vide Section 292 subsection (1((b) of the same constitution, please,”

The end justified the means. Because most of what the first female CJN and her NJC chalked up as gross misconducts were not. Failure to deliver a ruling on scheduled date, for instance, is no misconduct under any law in Nigeria.

Some of the grounds on which the council did what some legal and judicial minds keep describing as a witch hunts were the string of investigations of allegations—contained in seven petitions, according to Mukhtar— her panels looked into.

But a number of them were made up by the panels and Mukhtar and not by the petitioners – Barr Ikenna Azubuike or Hon Ben Nwankwo or Elf Petroleum Nigeria Limited and its contractors.

Before the first panel, Nwankwo admitted his error in writing his petition and withdrew it because he had written it out of ignorance. Azubuike prayed in his main petition that Olotu be asked to conclude hearing of his case because she could not refuse to perform a public duty for personal reasons. Olotu had earlier on discontinued hearing of the matter for personal reasons.

The first panel headed by Justice O. O. Bamigbola, Chief Judge, Kwara State found in respect of Nwankwo’s petition as follows-
“We find that the petition by Hon. Ben Nwankwo complaining of his not being heard, was based on an erroneous belief that it was the responsibility of the judge to join him as a party. Hon Nwankwo has a duty if he is interested in the matter before the Court to seek to be joined… In conclusion, we consider that Hon Ben Nwankwo rightly withdrew the petition before us”

In respect of Azubuike’s first petition, Bamigbola’s panel found that–” Barr Ikenna Azubuike in his testimony said that he had no grievances against the Judge in his own petition of 2nd October, 2012.
In respect of Azubuike’s main petition dated 24th April, 2013, Bamigbola ‘s panel confirmed his prayer–” Her Lordship should be instructed to conclude this matter forthwith without further delay. This is an official assignment and not a personal work. Personal reasons are not official and we are entitled to know her reasons in court.”
Bamigbola’s Panel erroneously found that on 23rd April,2013 when Olotu withdrew from the case for personal reasons, the case had reached judgement stage. The erroneous finding led to more errors of the Bamigbola Panel — “We find that Hon Justice Olotu failed to deliver judgement twice in the case. That was what gave impression of delay to the parties”
ALSO SEE: NJC and The Olotu Integrity Test

Azubuike alleged in his petition that his case was adjourned to “23rd April 2013 to take all pending applications together with the substantive suit.” There is however absolutely nothing in the record of the Panel to support their finding that the case came up for judgement on 23rd April, 2013.

It can seen that there there is no allegation from the petitioners in their petitions or in the record of the. Panel to support the finding of the Panel that Olotu “failed to deliver judgement twice.” So, it was a creation of the Panel.

Mukhtar , while chastising Bamigbola and his team for not delivering Olotu’s head on a platter, made her own allegation to the panel–” that in the case in hand, judgement was not given in 6months. She pointed out that apparently the Committee was not thorough in its investigation as she had read the petitions against the Judge personally.” There is no allegation to this effect from the petitioners or evidence from them before the panel

Bamigbola and his panel rewrote their report as directed by her majesty Hurricane Mukhtar and found Olotu guilty of failing to deliver judgement twice after the case reached judgement stage twice. They even backdated their report.The panel consequently made findings in their second report which did not arise from the petitions and evidence before them.

One wonders if this is not a breach of the cardinal principle of fair hearing- Mukhtar and her panel became judges in their own causes, thereby tainting the entire proceedings of the Council concerning Olotu with bias and prejudice and mortal breach of the fair hearing rule and abuse of office. The continued investigation of Olotu also raised serious questions of the independence and impartiality of Mukhtar, the Council and its panels, including the second panel later set up by Hurricane Mukhtar.

Another aspect of the investigation is that Bamigbola and his panel did not at any time confront Olotu with the allegation they lodged against her. There was therefore no proper investigation in the true meaning of the word before the Panel made its report to the Council headed by Mukhtar and the Council accepted the report.

On the issue of delay of judgement in the Port Harcourt/Uyo case, the second panel headed by Justice Abimbola Olopade, Chief Judge of Ogun State found that Olotu misconducted herself by not delivering the judgement after 90days contrary to the Constitutional provision. This was inspite of the evidence from Olotu that the delay in delivering the judgement was caused by the heavy workload she had to deal with in her new station, Port Harcourt after her transfer from Uyo, and other ad-hoc official assignments. The second panel also ignored the evidence before them showing that during the relevant period covering about 7 quarters, Olotu had about 4000 cases assigned to her during the period, 5000 cases/motions pending before her at the end of the material period, heard and concluded about 730 cases/ motions – about 200 of which were contested. The panel also did not consider relevant the facts before them that Olotu concluded the case in question within three years in spite of her transfer from Uyo to Port Harcourt and other exigencies of duty.

We have seen in recent times the Council imposing less severe punishment on judges found guilty of this same alleged misconduct – Justices Ajumogobia, Enebeli, Esowe and Etuk were given serious warning. Some of them were in addition put on the NJC watchlist for different lengths of time. Esowe’s time on the watch list was one year, Enebeli got 3 years, and Ajumogobia got 4 years. Etuk did not get any time on the watch list.

It is also observed that the panel did not recommend retirement for Olotu. It only recommended “sanctions” The issue of her retirement as can been seen from the minutes of meeting of the Council came out of the blues.

Olotu was also retired for an administrative lapse- that the case file in the Uyo case brought to Port Harcourt on the orders of the Chief Judge for Olotu to conclude in Port harcourt was not returned to Uyo after she concluded the case. The petitioners specifically made this allegation against the Port Harcourt Registry, but Olopade’s panel held Olotu responsible for the administrative lapse and ignored her defence that she was not responsible for the movement of files in the court. This is one of the “misconducts”which the Council chalked against Olotu for her retirement.

The Olopade Panel found that Olotu’ s failure to deliver a ruling on the scheduled dateč was misconduct. The petitioners, Elf Petroleum Ni geria Limited and its contractors did not make any allegation to this effect. The Olopade Panel came up with it in their recall proceeding. Consequently, they became judges in their on cause just like Bamigbola Panel and Mukhtar.

But, according to ex-CJN Muktar, the reports of the two committees were considered and accepted by the NJC at its meetings in which she was chairman. She appealed to the constitution, code of conduct for judicial officers and the judges oath of office to sell Olotu’s guillotine to Jonathan.

Interestingly, Muktar did not state the specific provisions by the constitution or the code of conduct and oath of office which Olotu contravened to warrant her retirement. So, the laws Olotu actually contravened the necessitated her premature retirement are not known to anyone till date – not to Muktar, not to President Jonathan and his Attorney General, Mohammed Adoke, not to Council, and certainly not to Olotu!

Olotu has since 2014 sought justice in court—against Mukhtar, Jonathan, Adoke, NJC, and many others in the orchestra that eased her out of her job.

The ex-CJN was spitting fire then, especially because Olotu took her to court.

Many have believed the court is the last hope of the common man.

It’s now the solace of a frustrated federal judicial officer that has spent almost half of her life in service of justice.