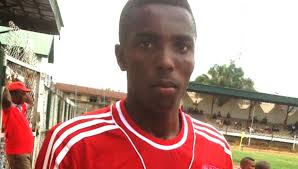 Shooting to Stardom (Chikatara, ‘God has spoken rightly’ )A little over a year ago, Chisom Chikatara was just another lad helping his parents make ends meet by tramping the streets of Umuahia, the Abia State capital.

He did so with a tray-load of kola nuts, the roundish caffeine-fruit that plays a very important role in his Igbo traditional welcome rituals for guests.

When sold out on a good market day, each of those tray loads of about fifty kolanuts (usually less) could fetch N1500 (less than $10) which doesn’t happen often.

The name Chisom literarily translates to ‘God is by me’ or ‘God is following me’ and the lad seems to have lived up to his name going by his good fortune to have been picked by an academy coach at a
ground where he had elected to take a break from street hawking to join others boys in a kickabout.

It was the beginning of the story that has seen him earning much more money in one month than he could have made in one year selling kola nuts.

With the same divine benevolence bestowed by his name, Chisom also had the fortune of breaking into the first team of Abia Warriors, when they campaigned in the Nigeria National League (NNL), the second tier of football in the country.

This, at only his first try. And that God still stayed by him through his first season in professional football to now compete at the highest level of league football in Nigeria as he scored nearly 50% of the 34 goals that saw Abia Warriors finish tops in the NNL Group B.

Things were to get even more heady. On Saturday, March 8, 2014, he played alongside some celebrity names in domestic football like Bishop Onyeudo, Ogbonna Okemiri, Emmanuel Fabiyi and Chidozie Johnson amongst others as he tasted first action in the top flight Glo Premier League against Kaduna United.

For a young man that just a few short months before, was one of the army of street hawkers, the spare time he spent training with the New Generation Football Academy under the care of Coach Uchechukwu Nwabuko has paid mighty dividends.

A fairy tale life, many will say but bringing it up for discussion didn’t elicit the kind of glitter in the eyes one expected from the hugely shy player as he was approached at the end of the Glo League 2013/14 opening day match at the Umuahia Township Stadium. “I dwell more on where I am presently than looking back to where I was,” he remarked offhandedly before quipping, “but I am happy with the attention my humble beginning has drawn to me because it can help push my career by people always wanting to talk about me.”

The match that was beamed live on cable television that reached global audiences and it didn’t turn out the same story book debut Chisom would have wished as fired blanks though his team won. It was the very first match he would appear in that was televised with cameras trailing him and team mates while cables ran the entire perimeter of the pitch.