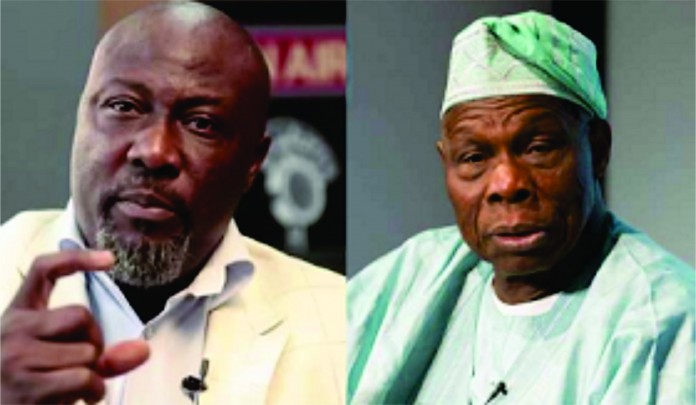 Senator Dino Melaye, the Chairman Senate Committee on the Federal Capital Territory, has raised a legislative query on the cost of the Abuja intra city rail project, handled by the administration of former President Olusegun Obasanjo while the current Governor of Kaduna State Mallam Nasir El-rufai held sway as the minister in charge of the territory.

While fielding questions from the committee the Project Manager of Chinese Civil Engineering and Construction Company, (CCECC) Etim Abak, told the Senate Committee on the Federal Capital Territory that former President Olusegun Obasanjo awarded the Abuja Rail Project in 2007 without an engineering design or a Memorandum of Understanding.

Mallam Nasir el-Rufai, allegedly signed the $841,645,898m contract based on an uncalculated estimate.

The committee was also told that the contract, which was for 60.67-kilometre rail project, was inflated by $10m per km and that the length was later reduced to 45km without refund of the cost for the 15.67 km that was dropped off from the project.

The Senate committee, led by Melaye, were at the site of the project to carry out oversight functions, therefore, demanded the refund of $195,878,296.74 being the amount for the 15.67km that was cut out, from the Chinese firm handling the project.

Abak told senators that the contract was signed by the then FCT minister without design and MoU, and that it was carried out based on conceptual design.

Abak said, “The contract was awarded based on conceptual design and estimates were not properly done. There was no formal design submitted and rail bridges and crossover bridges were not captured in the contract.”

Melaye said his findings revealed that the rail project was inflated by over $10m per km and wondered why such an act was perpetrated by the handlers of the project.

The senator added that the contract sum was $841,645,898m and that the project completion period was 48 months while the scope of work was 60.67km standard gauge, with double railway tracks and associated permanent way within the FCT.

He wondered why the 60.67km project was later reduced to 45. 245km without reduction in its cost.

He said, “Now, you have reduced the length of the standard gauge from 60.67km to 45.245km, meanwhile, there is no concomitant reduction if you juxtapose the length in kilometres and the reduction in terms of the cost.

“The Federal Government has so far invested N31.5bn and another N7.6bn from the SURE-P fund and if you put these together, we have altogether N39.1bn invested in the rail project, leaving the balance of N113. 233,155.32.

“The N3bn proposed in the 2016 national budget for the FCT was for the rail project. If you look at this, I would want to say that I did a personal research and looked at rail construction of the same specifics, of the same technology across the globe and one cannot but complain that the cost of railway project in Nigeria is on a very high side.”

He wondered why it was costing the Federal Government so much to construct a railway of just 45 km unlike the construction of the same specifics across the globe.

He questioned the rationale behind the government’s loan of $500m from Exim Bank of China for the project, saying that the money which the Federal Government had so far injected into the project was enough to execute the entire project.

He said, “From my own calculation, in fact, from my comparison with other rail projects across the world, the Federal Government investment in this project is enough to execute the project without taking a loan as high as $500m from China.

“From our research and it’s very simple, the world is now a global village. As you are sitting here now, on your phone you can google, even in India and Egypt.

“Fortunately, one of those projects in Zambia was also done by this same company, CCE. We have six countries and the average cost per km, none is above $4m per km. Why is the Nigerian project costing $13.8m approximately $14m?”

It will be recalled that Senator Melaye, an outspoken member of Nigeria’s upper legislative chambers blew the whistle, on software REMITA being used for the operation of the Treasury Single Account last year which turned out to be a hoax.