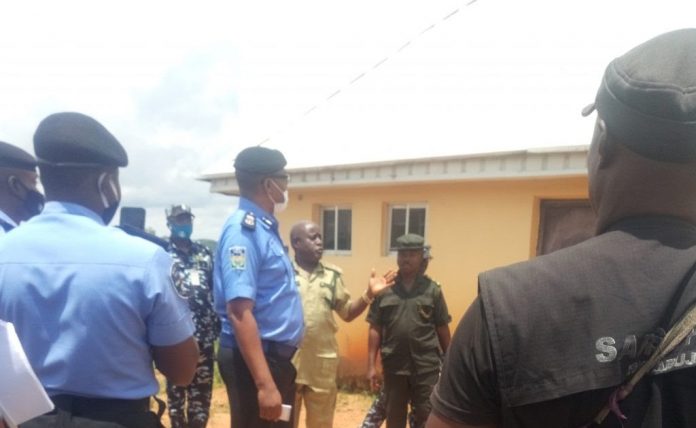 Share this on WhatsApp
Armed men on Thursday morning ambushed some officials of the Nigerian Correctional Service within the vicinity of Plateau State High Court in Barkin Ladi local government area of the State and freed some suspects taken for arraignment in the court.
The suspects who were said to be 14 in number with alleged crimes ranging feom rape, kidnapping to murder were conveyed from Jos, the capital city to Barkin Ladi but the Service’s convoy was waylaid by the gunmen and six of the suspects escaped.
Unconfirmed report had it that the gunmen who laid in wait near the court premises opened fire on the convoy but the officials did not retaliate and the targeted suspects were freed by their alleged gang members.
The State Commissioner of Police, Edward Egbuka had visited the area even as the State Commandant of the Nigerian Correctional Service, Mr Musa, briefed him of the incident stating the Court did not notify him of a change in hearing date as it was gathered the suspects were not supposed to be in court at the time of the incident.
A court source who anonymously said, “We only had four cases today with only one criminal, and the suspect was not among those brought from the Correctional Centre. The court since resumption from lockdown has hardly heard five cases a day, let alone ten, to have warranted the deployment of those suspects today.”
However, four out of the six fleeing suspects have been arrested while two are still at large and two motorcycles said to be abandoned by the gang which ambushed the convoy have also been recovered.
Share this on WhatsApp