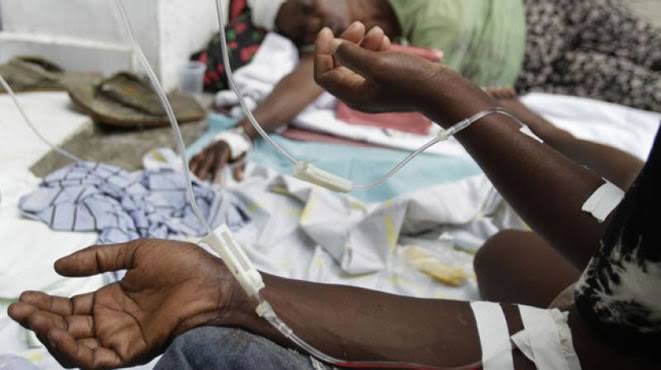 As northern and eastern states continue to grapple with cholera outbreaks, states in the southwest are beginning to recording episodes too.

Ogun on Sunday night confirmed the outbreak of gastroenteritis with some cases recorded in Magboro, Ofada Ward of Obafemi Owode LGA.

Commissioner for Health Tomi Coker said the reported case of the outbreak was predominant among commercial motorycle riders and scavengers in the area.

Cases reported have returned from a trip outside the state has been linked to the source of the outbreak, while the common public toilet used has been the channel of transmission.

One unregistered clinic run by a quack has also been identified as a channel of transmission.

“The causative agent cannot be confirmed yet because appropriate sample could not be collected as there were no active cases yet to commence antibiotics,” she said.

A number of people are currently receiving treatment to control the number of casualties, adding that an unregistered clinic run by a quack had also contributed to the outbreak as the cases were being managed unreported.

A treatment centre has been set up at the Magboro-Akeran Health Centre where treatment items has been made available by the department of public health.

Cholera has killed no fewer than 150 people in Katsina, and has been spreading across Abuja.

She added that “neighbouring communities have equally been sensitised on steps to take and where to seek care or report any suspicious cases, while the suspected public toilet had been sealed for sanitization.

Traditional rulers in the area, according to Coker, have also been engaged for their support in keeping their communities safe and calm, while healthcare workers continue active surveillance in the affected community.