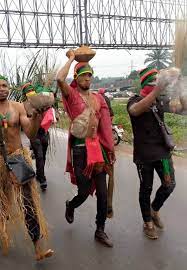 Armed with the charms that could fend off bullets which their witchdoctor gave them, a band of IPOB bandits breasted shootouts with the police in Oru LGA, Imo.

In one of the firefights, there were lots of casualties, including that of the juju man Paschal Okeke at his home Umudim-Ukwu Orji, Awomama.

The ESN militiamen returned to him—not to thank him, though.

According to Imo CP Mike Abattam, Paschal was shot many time, his head chopped off, body, and house burnt by the IPOB.

He said the ESN fighters were angry. The juju failed, and many of the militiamen died when try to shoot their way out of encounters with the police.

“The remnants of IPOB /ESN terror groups turned the gun on their juju priest,” he said in a statement.

IPOB and his combatant wing ESN are deploying propaganda and guerilla tactics to break the southeast away from Nigeria though their political and cultural leaders insist secession is not the answer.

Across the five southeastern states, Rivers and Akwa Ibom, IPOB have been attacking government facilities, killing, and kidnapping security agents.

The tide has turned against them lately as the federal security forces continue to gain the upper hand.

A local witchdoctor had been earlier arrested in the state for aiding the outlawed group.