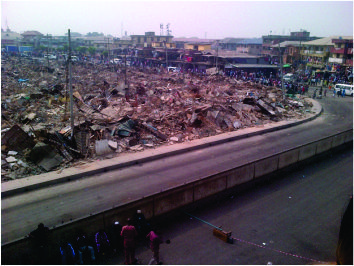 The Publicity Secretary of the All Progressives Congress, Joe Igbokwe, has said Igbo groups should not see the demolition of the Owonifari Market in Oshodi by the Lagos State Government as a witch hunt.

Some prominent Igbo factions, had come out to accuse the Lagos State government of deliberately demolishing the market which was occupied mainly by the Igbo.

Igbokwe said the market was demolished in accordance with the state’s megacity plan.

He said the allegation that Ambode demolished the market because the Igbo did not vote for him in the April 2015 governorship election was nonsensical, claiming that the initiative started from former Governor Babatunde Fashola far back 2007 due to constituted environmental hazard.

The APC spokesman said, “Former Governor Fashola had planned to evacuate that market right inside the Oshodi Roundabout loop since 2007 when he came into office. The market was an eyesore. A committee was set up to ensure its relocation. I was in that committee and Mr. Ben Akabueze was also in that committee.

“This new market has been there for years and these traders refused to relocate. Fashola left office without moving the market even though he cleared the bigger problem and the bigger mess called Oshodi. Ambode moved in last week to do the needful when all the avenues of dialogue which have been going on in the last eight years failed to yield positive results.”

Igbokwe lamented the opposition of the state government developmental policies, misconstruing such policies as anti-Igbo. He further stress that the demolition of Oshodi Market was for the interest of all Lagosians and should be detribalised.