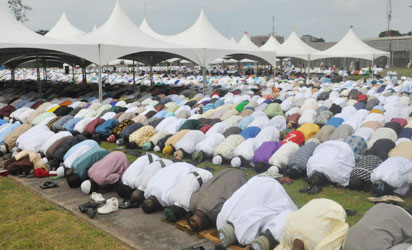 Share this on WhatsApp
Spread the love
As Muslims around the world are preparing for the celebration of Eid-el-Adha festival on Tuesday 20th July, the Lagos State House of Assembly Muslim Community urged the Federal and state governments to take proactive steps in curbing criminal tendencies that are likely to arise  across the country.
The Imams in the Assembly condemned the spate of killings, kidnapping and banditry across the country, noting that the level of insecurity requires maximum efforts to save innocent lives.
In a statement made available to newsmen through Alhaji Ahmed Oyasipe,
Chairman Publicity Committee  Lagos State House of Assembly Muslim community, the Islamic flank of the state legislature raised concern on the incessant killings which is now a recurring decimal in the nation.
“We are worried over the killing  spree in the country, especially in Kaduna, Zamfara States and other parts of the country where the rising spate of insecurity has continued to degenerate on a daily basis.
“Nigerians are tired of bloodshed and kidnapping  which occur everyday in the country resulting in the destruction of properties and loss of innocent lives.”
The body quoted the Holy Prophet Muhammad (PBUH) to have warned against the killing of innocent souls but preached love, peace and unity  during his life time.
While calling on Muslim faithful to ensure that they are vaccinated against the deadly  Coronavirus, the Imams urged citizens to visit designated centres across the State to get their doses.
“The rate at which the deadly virus has mutated into a new variant called Delta is alarming. It  behoves our brothers and sisters to take necessary precautions.
“We therefore urge Muslim faithful  to adhere strictly to the directive of government on protocols  on preventing the spread of the virus as Eid is celebrated. Proper hygiene conditions must be maintained in the course of killing your sacrificial animals. Cleanliness takes a centre stage in daily activities of Muslims.
We use this medium to inform the general public that there will be Eid prayer at the House of Assembly mosque on the Eid day by 9 a.m. Congregants are to wear their face masks as they come. Hand sanitizers will be made available at the point of entry and  only 50% of the available space will be allowed for use.
Share this on WhatsApp