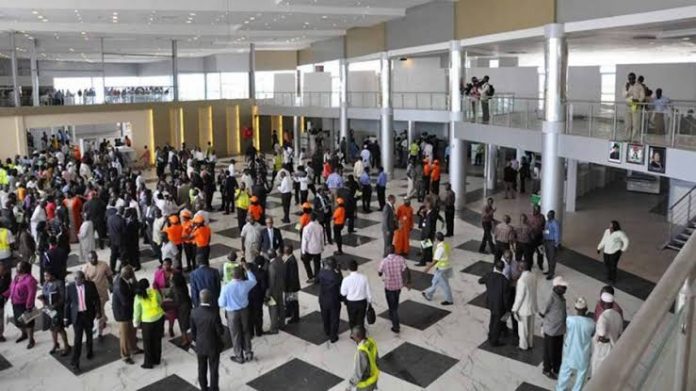 Nigerians returning home from abroad on holiday have lamented the huge fraud surrounding the PCR based COVID-19 test put in place by the federal government for people returning to Nigeria as a measure to combat the spread of the pandemic in the country.

Recall that the Federal Government as part of conditions for reopening of the country’s airspace in August said a negative PCR based COVID-19 test result remains a prerequisite for international passengers before boarding and upon arrival in Nigeria.

However, many of the passengers, especially Nigerians returning home from abroad have described the procedure as exploitative, fraudulent and frustrating.

Narrating his experience at a forum attended by the Federal Competition and Consumer Protection Commission (FCCPC), Ndubisi Ekulonu, a Nigerian based in Sweden, said he is fed with Nigeria, may not come back to the country if he’s able to return to Sweden.

He said he flew into the country on the 10th of October, and was supposed to return back to his base a week later, but has been stranded in the country due to the COVID-19 test which he described as being fraudulent.

“At the airport, there is a form that the federal government said we should fill online for people coming back into the country. When I filled out the form, I was given two option.

“To either pay with my card or pay on arrival. But because of the network Abuja here, I used my ATM card and also showed them that I have filled the form. They said I should give them my passport number which I did and gave me the POS to pay.

He said he was debited N42,750, and directed to a Lab in Maitama, Abuja to do the test. “But if you put the address of the Lab on google, it will take you to one plaza and when I got there they told me they don’t know anything about the lab and that I should leave their lab.

Ndubisi explained that after several hours, he was directed to one MM Conference Centre also in Abuja

“The man there said he would forward my test to Lagos. The second day when I went there again, I was told my name wasn’t on the list, so I had to pay another N42,750 for a brand new test. I had no choice because without the test, I can’t leave the country, so I paid for another test.

“To my surprise, just this morning I got another SMS demanding that I pay another N2,750 for the same test. This is frustrating, foreigners are not treated this way in this country, but citizens are being subjected to this humiliation in their own country,” Ndubisi lamented.

Another participant said his uncle has an American passport, and will rather use his US passport to apply for Nigerian Visa. “Because whenever he comes here, he is always respected and they treat him properly. And they don’t take advantage of him.

Reacting to the frustrations of the travelers, Ahmed Isah of Brekete Family, a reality radio and television program focused on human rights, advised Ndubisi and many others in similar conditions not to lose faith in the country.

“FCCPC, I want to beg you over one thing. I want you and your team to escort this man and make sure that he gets justice today. This is annoying, yet some people are there stealing money, the money that will be useless to them, even their children are useless to them,” he added.