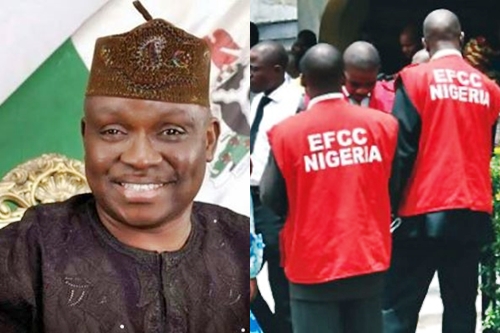 The Economic and Financial Crimes Commission (EFCC) stated it has traced N1.3billion worth of properties to Governor Ayodele Fayose of Ekiti state.  The anti-graft agency said it was a major breakthrough in the alleged corruption case against the Ekiti state governor and his associate Abiodun Agbele. The EFCC has come forward to reveal how N1.3billion houses were purchased by Ekiti state governor Ayodele Fayose. Agbele is presently in the custody of the anti-graft agency. Fayose’s asscoiate was alleged to have received N1.219bn from one time minister of State for Defence Musiliu Obanikoro on behalf of the Ekiti state governor prior to the Ekiti governorship poll in June, 2014.

In addition, detectives from the EFCC alleged Fayose used a large chunk of the N1.219bn along with some money from Ekiti coffers to purchase houses in Lagos and Abuja which have since been seized by the anti-graft agency. An investigator in the EFCC stated that the embattled governor used Agbele to purchase the properties in a way that would make the source of the money look legitimate. The EFCC investigator revealed that the two properties at Abuja were purchased with bank loans from Skye and Zenith Banks on the surface. On the other hand, the stolen money was said to be used in offsetting the bank loans.

The investigator said: “From the Dasuki funds, they had about N300m stashed in one account. However, when they were going to buy the N270m property located on Yedseram Street, they did not use the N300m from the stolen funds. Rather, they obtained a loan of N120m in the name of Spotless Hotel from Zenith Bank to deposit for the house. “They then took about N150m out of the Dasuki money to pay the balance on the house and then used the same Dasuki funds to offset the loan. They went through all this stress to cover their tracks and make it look as if it was a bank loan they used in buying the property. “Why did they take a loan that would be gathering interest when they had more than enough money to buy the house?”

The EFCC detective said when it was the period to purchase the four duplexes at Lagos, the Ekiti state governor and his associate  overpaid the seller of the houses and then told the seller to use the balance which was N200m to pay for another house at Abuja. The source said, “The worth of the four duplexes in Lagos is N1.1bn, which was sold by Still Earth Nigeria Ltd. However, Fayose and Agbele paid Still Earth N1.3bn in cash and then told the company to transfer the balance of N200m to Skye Bank. It was that N200m that was used in purchasing the building at 44 Osun River Crescent, Abuja. This was done so that no one would be able to trace the fund to them.” Likewise the anti-graft agency has discovered about N60million in an account belonging to Agbele. The account titled was BYKD Consultant Limited and was domiciled in Diamond Bank.

It stated it received some money from Ekiti state local governments under the name of Millennium Development Goals. A copy of the statement of account was seen and showed that on February 18, 2015, at least N18, 159, 050 was paid into the account. On the same day, about N15, 319, 650 was deposited into the same account while about N11, 238, 500 was paid into the account on the same day among other transactions. The transaction history showed Fayose’s associate deposited about N40m and N15m into the account of Affordable Motors. “This is a new discovery and we want to know why such funds would be released by local governments because so far there is no evidence of any contract between the local government and Agbele,” the detective concluded. The Ekiti state governor is finding himself from one controversy to another; a few days ago, one Olaoluwa Omotoso, a bullion van driver said he transported the N1.219bn in which the EFCC alleged was delivered to Governor Fayose.