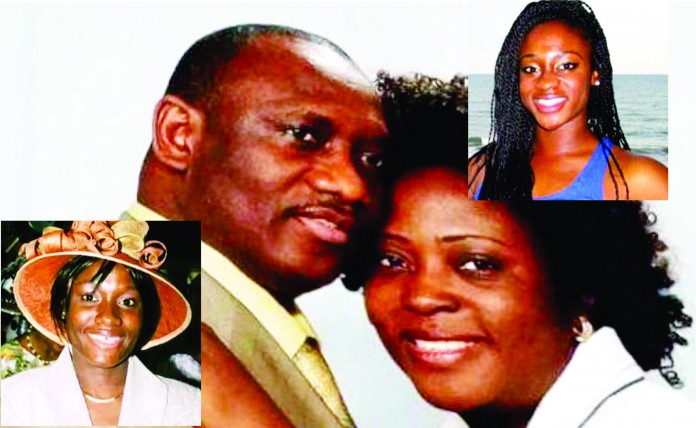 As statistics of homicide against Nigerian women spikes in the last ten years at home and abroad, gender advocates would require more than mere placards and protests to tame the macho beast tearing their ranks apart

WITH at least one third of all female murder victims aged 12 or older in the United States being killed by male intimate partners — husbands and ex-husbands, boyfriends and estranged lovers–falling in love in Uncle Sam’s country can’t be more dangerous an adventure than ever.

Nnenna Ogbonna realized too late February 2016 when her estranged husband, Muhammadu Igomigoh, opened fire on her before turning the gun on himself in Baltimore, USA–thus making the Registered Nurse the latest casualty in the spiraling list of Nigerian women to be so brutally executed by their lovers right under Uncle Sam’s nose.

Mariam Adebayo also learnt that lesson the fatal way on 1 June, 2015. The 24-year-old graduate of Public Health died from a gunshot injury at a hospital after her white ex-boyfriend, Donald Wayne Bricker, shot her at close range in the parking lot of a Target retail store in Maryland, United States.

Mariam and Bricker had dated for six months before the two broke up, but Bricker continued to threaten her , National Daily learnt.

The duo had agreed to meet at the shopping center to talk when the estranged boyfriend pulled a gun on the unsuspecting Mariam.

Both murders did not exactly come across as unusual. The US National Data on Intimate Partner Violence says over 18,000 women Were Killed By Men between 2003 and 2009 in single victim/single offender incidents alone. And where the victim/offender relationship was known, according to the Report, 63 percent were killed by an intimate partner with 550 of them through a firearm , most often a handgun.

That’s in America where it’s state law for every Tom, Dicky and Harry to own a gun; where the same law is unable to control abuses arising from legalizing ownership of such a lethal weapon.

Our husbands have gone mad again
But wait until you study the grim figures and their pattern of distribution, then you are likely to discover a sickening trend that will prove a shocker. Nigerian women living in the US fall among the worst casualties. and their men, the worst culprits!

It’s a sobering fact really. But the statistics of Nigerian women being killed or abused by their Nigerian husbands or lovers at home and abroad is ramping up fast.

A Nigerian man, Martin Ebegbodi, was charged with murder in June 2014 after he confessed to killing his wife, Isioma Ebegbodi, on Saturday, March 22, 2014 in West Harris County, Texas. Isioma Ebegbodi nee Unokanjo was aged 36 years and studied medicine at the University of Lagos before her flight to America.

Shortly after his estranged wife was shot in a St. Louis Park parking lot, Michael Iheme called 911 and announced: “I have killed the woman that mess my life up… a woman that had destroyed me.”

Iheme, 50, was charged with first-degree premeditated murder in the death of Anthonia Iheme, 28. Hennepin County court records showed that Anthonia had an active harassment restraining order against Iheme before her death. The records suggested a history of domestic abuse, including threats by Iheme to kill his wife.

Police also said that an hour and a half before the shooting, Iheme went to the day-care center for their son, 4, and daughter, 3, and left new emergency contact information. “in case something happened today.” Jim Adams 612-673-7658”

Just two days after Christmas in 2013, Babatope Owoseni was also arrested in East Orange, New Jersey in connection with the death of his wife who was nine months pregnant at the time of her death. Fatoumata Owoseni, 26, was found lifeless at the 39 South Munn Avenue apartment she shared with Babatope.

Three years ago, another Nigerian from Old Umuahia, Abia State, Kelechi Emeruwa, was charged and convicted of first-degree murder of his wife, Chidiebere Ochulo. Kelechi was said to have stab his 36-year-old wife severally with a kitchen knife until she died in a pool of her blood on new year’s day.

The Registered Nurse had just returned from her father’s funeral in Nigeria when she got into a brawl over what Kelechi had described as a lavish burial in Nigeria.

John Onwuka, 49, from Akwete community of Ohafia Bende Local Government Area of Abia State was also charged with one count each of homicide and use of a knife in the commission of a felony on Saturday August 19, 2006. He stabbed his nurse wife of twenty five years, Gloria Onwuka, aged 42, fourteen times in her bedroom while she was getting ready for work. She was a nurse manager at the time of her death.

No safe haven
Move over the tragedy befallen Nigerian women in America. They are not exactly safe at home either. An analysis of the trend of domestic violence in a recent crime and public safety survey in Nigeria by CLEEN Foundation shows that between 2010 and 2013, there has been a progressive increase in the percentage of domestic violence cases in Nigeria.

And the spate of violent abuse and homicides against women in the periods covered by the survey makes the findings almost indisputable. On Saturday, July 21, 2012, Mathias Eze, a former Commissioner in the Enugu State Independent Electoral Commission (ENSIEC), shot his wife, Patricia over the woman’s failure to prepare stewed rice for the day’s supper. They had been married for 16 years with six children before the ex INEC Commissioner murdered his wife.

Christian Agbaga, 62, also murdered his wife after she allegedly refused him sex. Regina Agbaga was said to have been strangled by her husband at their home on 10, Ligali Street, Ajegunle, Lagos.

Janeth Odehgbe survived by the whiskers after her husband set her on fire following disagreement over her collecting a cup of wine from another man during a party they both attended.

The food seller said her husband poured petrol on her on 11 September, 2012 while she was preparing Indomie noodles for a customer and fire caught her immediately. But for passers-by who came to her aid.

“Passers-by rescued me and ran after him to fight him, but immediately they noticed it was him, they all went to their various homes…”

Naomi Chidiebere 24, was not so lucky after her husband set her ablaze four years ago. The late Naomi had drew the ire of her husband, this newspaper learnt, when she challenged him over his drinking habit.

He beat her up and later rushed into the store where they kept petrol for the generating set and poured it on her as she ran into the closet to hide from his beating. Naomi died in the hospital.

The Perplexing Twist
Kemi Okenyodo, Executive Director at the CLEEN Foundation, says domestic violence against women like Janet and Naomi is by far a more leading crime which is still largely underreported in Nigeria.

But the human rights lawyer is not exactly specific about which ethnic group is more prone to being perpetrators or victims of domestic violence.

“We have no verifiable evidence/data in this regard. Furthermore our public surveys and other studies conducted on domestic violence reveal that it is a crime that cuts across age, religion, economic class or social status and is happening in both rural and urban areas, she told National Daily.

Yet the distribution of the pattern of occurrence yields a disturbing reality. Men of Igbo extraction are more likely to abuse and kill their wives than others in the rest of the zones. According to the group’s crime and public safety findings for 2013, experience of domestic violence by zones shows South East with 43 percent, North East 35 percent and South-West 35 percent in terms of regions with the highest rating for domestic violence.

Well, it appears the saber rattling has just begun for women advocates like Kemi Okenyodo and Abiola Akiyode-Afolabi of the Women Advocate Research & Documentation Centre [WARDC]. The truth is that addressing the issue of domestic violence within the context of marriage stems is difficult. Marriage, for one, is held sacred in the Nigerian culture, hence its related abuse is treated secretly and privately.

For Adewale Adeduntan, South-West Zonal Facilitator at the Christian Rural and Urban Association of Nigeria [CRUDAN], much of the abuses being perpetrated against the women are considered culturally acceptable. So it’s understandable why More than 20 percent of women around the world are reported to have been abused by men with whom they live. Or that among women aged 15-44 years, gender-based violence is responsible for more death and disability than the combined effects of cancer, malaria, traffic-related injuries and war put together.

“expectations of females as passive, nurturing, submissive, and emotional also reinforce women’s roles as weak, powerless and dependent upon men. The socialization of both men and women has thus resulted in an unequal power relations,’ Adeduntan explained.

‘And where the opposite is the case, there is usually a sort of unhealthy rivalry which could be lethal.”

That’s a brutal conclusion from Adeduntan really. Especially with reports showing that women who are victims of domestic violence are 12 times more likely to attempt suicide than those who do not experience such violence.