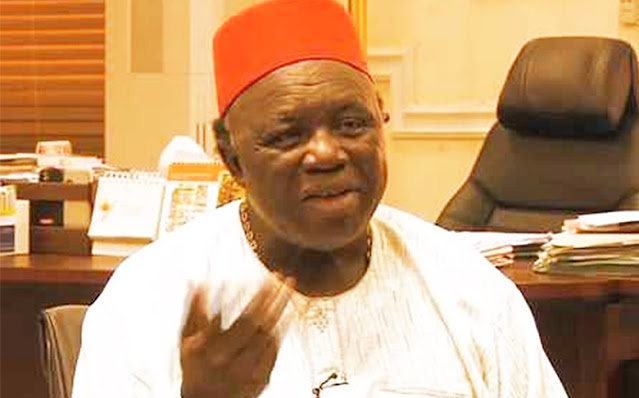 Who was one day visit to the southeast that the conception that the Igbo are separatist and secessionist agitators is a fallacy, noting that there would be no separatist agitation if there is a government that promotes equity, justice and liberty in the country.

Ambassador Obiozor in his speech in Owerri, Imo State, noted that the President’s visit and presence in Igboland,

Owerri, Imo State, in particular, had more than political significance. He emphasized that in

manner of symbolism, the visit had thrown light into the cloudiness

and doubts surrounding the perception of the relations between the Nigerian Government led by President Buhari and Ndigbo. “Your presence reassures us that there is still reason for optimism for Nigeria and Nigerian unity.

Ndigbo Worldwide, and on behalf of the galaxy of Ndigbo leaders

gathered here today, and the entire Igbo Nation, to welcome Your

“It is also our firm belief that this visit will mark the beginning of a new chapter of dialogue,

cooperation and understanding between Ndigbo and your

The Ohanaeze Ndigbo President-General alerted President Buhari that “after all Nigeria has gone through in its nearly 60 years of chequered history of crises and continuity and the spectacular patriotic role of Ndigbo to ensure its unity and survival, the consistent perception that the Igbos are separatists and

secessionists agitators is a historical fallacy.

“Indeed, if the truth must be told, Ndigbo are the most federating unit

among all Nigerian citizens.

“Generally speaking, anywhere in Nigeria you don’t find the Igbos, run away, something is wrong there. Igbos are market people and travel adventurers.”

Ambassador Obiozor maintained that consequently, what

“This is who we are. Our Igbo adage says “Ojemba Enwe Iro”, literally translated – A traveler makes no enemies,” he stated.

Obiozor also protested that “another misconception of Ndigbo is that Igbos cannot speak with one voice,” adding: “ironically that is another fallacy, there are more things that

unite Ndigbo than divide them.

“This sense of egalitarianism is what defines the Igbo system

of governance based on liberal democracy and social justice.”

Obiozor expressed that in spite of all the threats of secessionism or separatism facing the country, there is no doubt that no secessionist element can

succeed in Nigeria provided there is good governance based on

equity, justice, and fairness to all the citizens.

trying to push us out of Nigeria.

“Ndigbo in Nigeria are like fish in the ocean, no matter how rough the storm is, it cannot drive the fish out of the ocean,” the Ohanaeze leader said.

He told President Buhari that it is in this context, that the Igbo  nation sees a new dawn in his

distinguished presence in Igboland and believe that on his return to

Abuja, the significance and substance of the visit will form a new

foundation of a platform for meaningful dialogue on critical issues of

concern to the Igbo Nation.

today is security. He stated that the security of Ndigbo in Nigeria and beyond has become a compelling primary responsibility of serious concern for Ndigbo. “Regrettably our Southeast Zone has recently become a theatre of conflict, negating the peace-loving nature of our people,” he lamented.

Prof. Obiozor made a case for state police. According to him, “In this context, Ohanaeze Ndigbo calls for the establishment of a zonal and state police apparatus to support and complement the existing

“It is in this same vein that Ohanaeze Ndigbo, appeals to you, Mr. President, to see to the release of Igbo youths detained by various security agencies across the country.”

Obiozor acknowledged the infrastructural work being undertaken by the Federal Government in the southeast such as the 2nd Niger bridge under the Buhari administration. “It symbolizes the unity and bridge across the various

regions of the country,” Obiozor celebrated. However, the Ohanaeze Ndigbo leader appealed to the President that the southeast zone is in dire need of more infrastructure sponsored by the Federal Government, which include roads, bridges, railways, and ports. “It is the considered view

of Ohanaeze Ndigbo, one that is also shared by the Igbo people that

federal investments in these critical areas will revitalize the economy

and will have the tangential effect of dousing the youth restiveness and unemployment in the zone,” Obiozor declared.

The Igbo nation leader also stated: “nothing is more important to the Igbos in Nigeria today, more than the restoration of serious sense of

belonging and the spirit of Nigeria’s founding fathers based on one nation, one destiny.

“And we believe this is possible through

Devolution of Power ensuring a sense of balance in our political