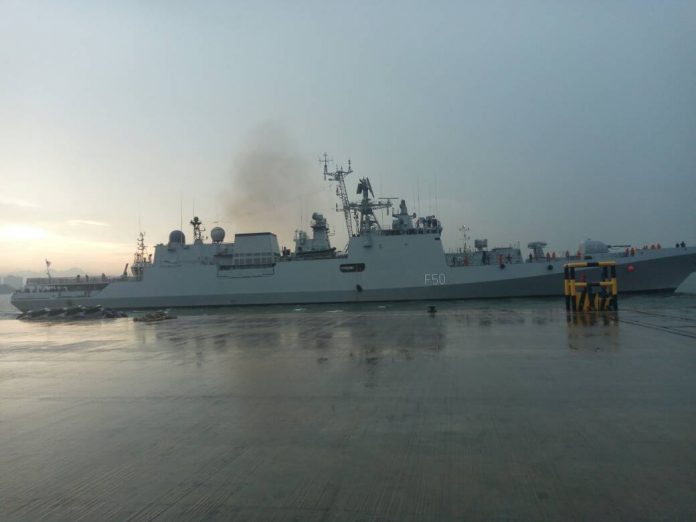 The Commanding Officer of the ship, Captain Zituraj Sahu, who led the Indian naval team, told journalists that the visit was aimed at strengthening cooperation between the navies of both countries.

He said the Indian Navy Ship (INS) TARKASH would also undertake tactical and operational trainings of some Nigerian Navy personnel and offer free medical services to the populace.

“When we make visits like this, we usually do some benevolent activities. This time around, we would undertake few medical services for the needy.

“The ship’s medical team would be there to render whatever medical attention is needed. The entire crew and I are very delighted to make this port call to Nigeria.

“It has been a long journey. It took us 10 days to arrive here from Casablanca, Morocco,” he added.

“The ship’s visit is in commemoration of the navy week and to strengthen existing friendship between both nations,” he said.

Bobai said the ship sailed into harbour Wednesday morning, adding that both navies would have trainings to improve manpower.

“As you are aware, the navy is celebrating its 61st anniversary, which would end with ceremonial sunset. Their visit is one of the flag showing roles of navies worldwide, friendly navies exchange visits like this.

“In the course of the visit, the INS would conduct medical rhapsody and some tactical and operational training.

“We would exchange ideas, discuss on topical issues and security situations globally particularly in the Gulf of Guinea (GOG),” he said.

The Defence Adviser to the Indian High Commission in Nigeria, Capt. Gautama said the bilateral relationship, which had been in existence between the both navies, goes beyond training.

“There are ongoing discussions on provision of equipment to the Nigerian Navy. In the nearest future, you might see a ship built by India in Lagos,” he said.

INS TARKASH has a total of 300 crew onboard including 36 officers.