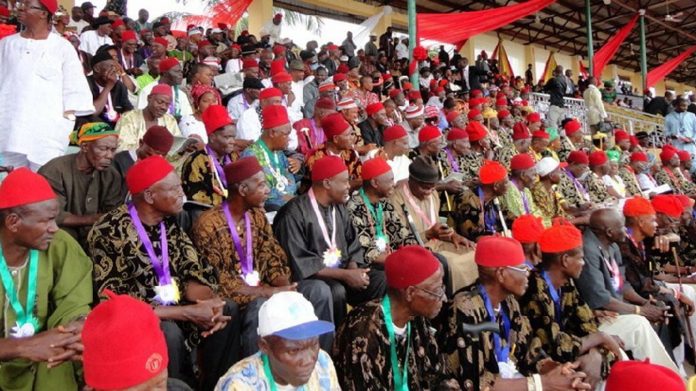 Apex Igbo group, Ohanaeze Ndigbo Worldwide has warned that the sit-at-home order by the Indigenous People of Biafra may lead to another civil war if not handled well by political leaders in the region.

In a statement signed by its Secretary-General, Mazi Okechukwu Isiguzoro, the group lamented that most Southeast politicians are unwilling to make sacrifices for the good of the region.

Isiguzoro, who noted that the Southeast is plagued with so many calamities and impediments, accused Igbo leaders and politicians of failing to show bravery amid the challenges confronting the Southeast.

“Ohanaeze Ndigbo Worldwide laments on the ineptitude of the southeast political leaders to show bravery, heroism, and political will to voice the truth to President Muhammadu Buhari on where he is not getting it right as the southeast remains the adversities and calamitous impediments that had befallen the IGBO.

“Ndigbo are cognizant of the fact that Abuja holds the remote controls of most actions of the southeast politicians, most of the southeast Governors are reluctant to make sacrifices for the southeast, they are inclined to trade off the Igbo’s interests for Abuja’s enticements and inducements, in compensation for doing Abuja’s bidding and interests in the East,” the statement reads partly.