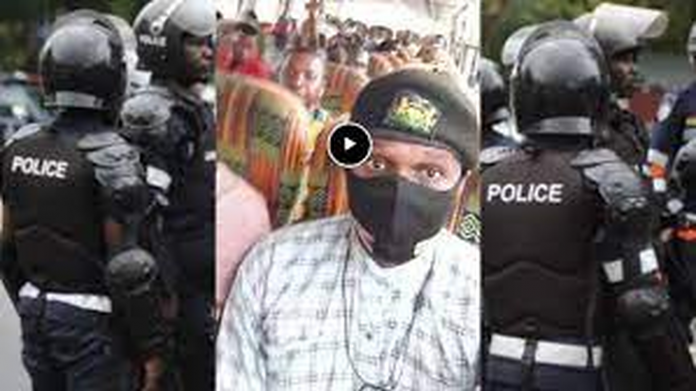 Ghana seems in earnest to help Nigeria in clamping down on members of the outlawed group IPOB and other Nigeria declares wanted.

Apart from deporting as many of the Biafran agitators in his country, President Nana Akufuo Ado has kept no fewer than 82 IPOB members the police arrested incommunicado, the group alleged.

Emma Powerful, the spokesman of the separatist group, has issued a warning to the Ghanaian government to stop collaborating with Nigeria’s President Muhammadu Buhari in clamping down on the group.

According to him, those members were arrested in Ghana during a meeting.

“It’s quite unfortunate that the Government of Ghana has made itself a willing accomplice to the oppressive Fulani -controlled Nigerian Government to suppress the agitation for Biafra restoration. But BIAFRA is irrepressible no matter how hard the enemies try!” a statement by Powerfu said.

He recalled the role he claimed Ghana played during the genocidal war unleashed on Biafra between 1967 and 1970.

“IPOB has not forgotten how Ghana refused to help the children of Biafra during that war of annihilation by Nigeria Government supported by British authorities in their botched bid to annihilate Biafra from the surface of the earth.”

He said about 107 people in their monthly meeting were detained and deported—25 of them to Nigeria and others elsewhere.

“We are telling good people of Ghana to look for our people living in Ghana and produce them to Biafrans government or they are ready for the consequences,” the group said.

Weeks ago, there were media reports Ghanaian police arrested members of the group during a meeting in Ghana.

IPOB lawyers later tweeted they have engaged lawyers to battle extradition of those arrested.