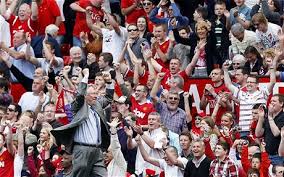 The iconic Alex Ferguson is famous for nurturing young talents

Bellingham, who has taken the Championship by storm with Birmingham City, is believed to have held talks with United on Monday National Daily further gathered.

His parents were spotted leaving Manchester United’s Carrington training ground in a 4×4 on Monday, with the 16-year-old midfielder thought to have been back in the back of the car.

Bellingham, who is Birmingham’s youngest ever goalscorer, was thought to be close to joining Borussia Dortmund with other top European clubs like Real Madrid, Chelsea and Bayern Munich also believed to be keen in acquiring the wonder kid..

National Daily however, learnt from the reports by the Telegraph that United have enlisted the help of legendary manager Ferguson in a bid to entice Bellingham.

The publication says the teenager and his parents were given a tour of United’s training ground in the company of Ferguson, Woodward and Jude

The iconic Ferguson has been seen more frequently at Carrington since his former protege Ole Gunnar Solskjaer took charge as manager.

However, the Scot’s presence on Monday has to be taken as a sign of United’s determination to snap up Bellingham from under their rivals’ noses.

With academy graduates Paul Pogba, Jesse Lingard, Marcus Rashford, Scott McTominay, Brandon Williams and Andreas Pereira regularly in the first-team squad, it will be easy for United to convince Bellingham and his parents that there is a clear pathway for young players.

Bellingham has scored four goals and provided three assists in the Championship this season for Birmingham, who value him at £50million.

The English wonder kid currently earns just £145 a week on a scholarship contract and has yet to sign his first professional deal, but he will be eligible to do so when he turns 17 in June, and he could be in line to earn an eye-watering £100k-a-week.

Share this on WhatsApp
Related Topics:Man UnitedSir Alex Ferguson
Up Next

Messi budgets €4m to save Ronaldinho from prison