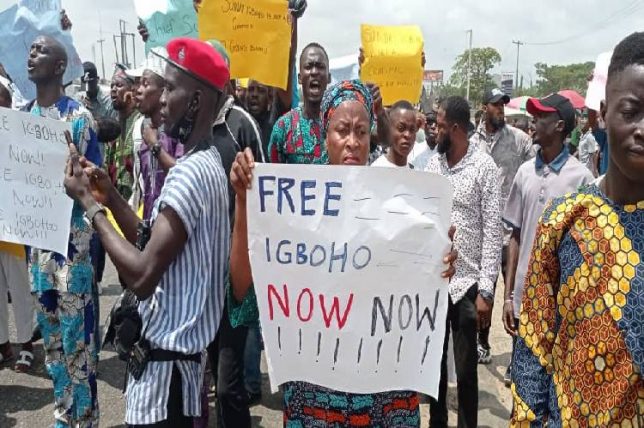 Mass protest erupted in Ibadan, Oyo State, during the Sallah celebration. Several supporters of the Yoruba Nation, including young and old, males and females, took to the streets of Ibadan, demanding the federal government to immediately release Sunday Igboho who was arrested in Cotonou, Benin Republic on Monday.

The protesters further told  the Beninese government to resist pressures from the nigerian government to grant extradition of Sunday Igboho to Nigeria.

It was gathered that the protest commenced from Igboho’s Soka residence. There were disruptions of vehicular movements on major roads in the city, though the protesters were not violent.

The protesting supporters argued that it is unjust for the Sunday Igboho to be detained outside the Nigerian jurisdiction, arguing further that the Yoruba leader detainee has committed no offence and as such should not be detained but be allowed to move freely without molestation.