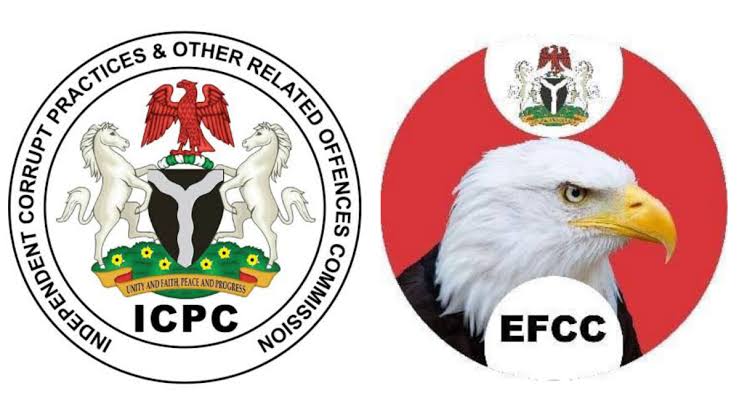 Some Nigerians have called for strengthening of anti-corruption agencies, by ensuring their independence to enable them tackle rising cases of high profile corruption cases in the country.

They said that the Economic and Financial Crimes Commission (EFCC) and the Independent Corrupt Practices and Other Related Offences Commission (ICPC) should be allowed to function without political interference.

The EFCC is charged with enforcing laws on money laundering and other financial crimes while the ICPC is focused on tackling corruption in the public service.

The respondents made the suggestions in separate interviews with the News Agency of Nigeria while assessing the performance of the two anti-graft agencies.

They said that though the anti-corruption agencies have performed relatively well, it was important to enhance their capacities in line with global best practices.

Some of the respondents said apart from making the agencies completely independent, it was important for them to be funded adequately.

They also canvassed for special courts to adjucate on corruption cases within specific time limits.

Martins Idachaba, a lecturer in the Department of Law, Kogi State University, Ayingba, said that President Muhammadu Buhari’s anti-corruption crusade had so far recorded some achievements.

He said that there were massive recovery of looted funds, blockage of treasury leakages through the Treasury Single Account and imprisonment of some corrupt public officers, including former governors.

Idachaba added that weak internal controls in Ministries, Departments and Agencies (MDAs) has encouraged corrupt practices in the civil service.

According to him, there is still financial recklessness, abuse of budgetary processes and non compliance with due process of appropriation in the MDAs.

“The systemic corruption in the Nigeria Police Force which continues unabated, high profile convictions of politically exposed persons across political, regional and any other form of divide have fallen short of public expectations.

“Why the anti-corruption crusade has not delivered much results is because of government failure to leave the fight against corruption to independent institutions.

“This is because the independence of these agencies is more theoretical than in practice. If it is in practice, it will separate genuine anti-corruption cases from politics,” he said.

Idachaba, therefore, recommended that mechanism be put in place to reduce opportunities for corruption.

He added that government should deploy more technology to reduce direct contact, where possible, between government officials and the public, to discourage bribery and corruption.

The lecturer added that the fight against corruption require strong institutions that must be free from undue executive, legislative and judicial interference.

“The Economic and Financial Crimes Commission needs more teeth, a starting point will be to increase its budget.

“This will go a long way in enabling the commission hire more personnel.

“It must also be freed from political interference to allow it to fight corruption without fear or favour because of the role played by politically exposed persons in corruption,” he said.

Idachaba emphasised the need for the judiciary to speed up the delivery of judgment in corruption cases.

He said that it was imperative for judges to stop giving teeth to corruption through undue adjournments of corruption cases.

Idachaba said like election matters, there should be timeline for the determination of corruption cases, saying the current situation of delaying high profile cases of corruption often dampen the morale of personnel involved in the anti-graft war.

“Judges to serve in the specialised court should be properly incentivised to mitigate judicial corruption.

“Punishment for corruption must be certain and should equate the magnitude of offence committed,” he said.

Another legal expert, Mr Samuel Nda, also called for the strengthening of the anti-corruption agencies to ensure optimal performance.

Nda said he would not rate the anti corruption agencies in the country very low in view of the environment and circumstances in which they operate.

He said strengthening the institutions through legislation, improved funding and making them more independent would improve their performance.

The lawyer advocated for legislation that would empower the anti-corruption agencies to keep suspects, when arrested, till the completion of investigation.

“The current law, where the institutions are not allowed to detain suspects beyond 48 hours during interrogation will not allow for diligent investigation.

“For me, I think it is better they are given adequate time to carry out investigations, because prosecution is easier with good investigation,” he said.

Nda, however, advised the anti-corruption agencies to always undertake proper investigations before making arrest, in line with global best practices.

He faulted the trend among anti-corruption agencies, especially the EFCC, where suspects were arrested without proper investigation.

“Our anti corruption agencies are not getting it right in this direction. Proper home work must be done before making arrest.

“We must look at how it is being done in other developed countries, because the Federal Bureau of Investigation (FBI) in the US cannot arrest a suspect without having concrete evidence.

“Our anti-corruption agencies must learn from FBI and others, because once proper home work is done before making arrest, the problem of keeping suspects beyond the stipulated period before charging to court is addressed,” he added.

Mr Olagunju Adetola, a civil servant, said corruption in the country had reached the level of a national emergency.

He called for a collaborative strategy involving the government and the citizens, to face the challenges posed by corruption head-on.

“The public image of the anti-corruption campaign in Nigeria is tarnished domestically and internationally with extremely slow progress on numerous anti-corruption commitments made by the government,” he asserted.

Adetola said government must continue to tighten the noose on persons corruptly enriching themselves within the system, to discourage others from the act.

Mrs Beatrice Samuel, a lawyer, said that government should demonstrate the political will to deal with any corrupt person without fear or favour.

She also canvassed for legislative and judicial support in the fight against the scourge of corruption in Nigeria.

“The belief that once an anti-corruption agency is created everything else will fall into place is patently untrue.

“If there is one lesson to be learnt from the history of anti-corruption activity, it is that there are no individual solutions but a cocktail of measures.

“No silver bullets but a mixture of successes and failures and no quick fixes but a long and hard learning process.

“But we all can come together to achieve this. Nigeria is a country with great potentials. We always take the lead on every tier of positive influence,” she said.

Other respondents like Mr Benjamin Kayode, advised that anti-corruption agencies must have strong evidence before sweeping on suspects.

Kayode, who lives in Abuja, said invasions and arrests based on suspicion was not good for the image of the anti-graft agencies.

For 28-year-old Nnamdi Agu, who claimed that his house was wrongly searched by the EFCC in 2020, the agencies must carry out proper investigation before arrest, to enhance their credibility.

He claimed that his residence was invaded by EFCC operatives in 2020 based on false information while he was at work.

Agu said that the operatives met his wife and informed her that they got information that the house was being used to harbor internet fraudsters, which they found to be erroneous.

According to him, the invasion aroused suspicion towards him from neighbours and he had to relocate to another environment.

NAN reports that the EFCC secured 2220 convictions in 2021, the highest since it was established, while the ICPC had recovered and restrained cash and assets totaling N166.51 billion from corrupt persons in two and half years.

The two agencies have been getting global support to strengthen their operations.