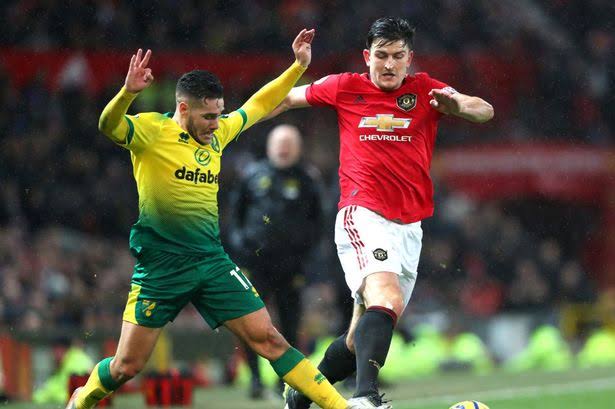 The 2019-20 FA Cup season resumes on Saturday after a break of almost four months, with Norwich City welcoming Manchester United to Carrow Road in the first quarter-final.
The Canaries are battling relegation in the Premier League but overcame Tottenham Hotspur in the last round, when United cruised past Derby County.
Both of these teams have plenty left to fight for over the remainder of the Premier League season, but they will need to put that on hold for this match as the last remaining chance of domestic silverware resumes.
United are looking to lift the FA Cup for a record-equalling 13th time this term, whereas Norwich have never even reached the final of the competition.
The disparity in FA Cup pedigree of the two clubs mirrors their form and fortunes heading into the match, then, with United now 13 games without defeat and Norwich having lost all three of their outings since booking their place in this quarter-final on March 4.
Champions League qualification will certainly still be United’s priority for the rest of the campaign, and they will have one eye on how Wolverhampton Wanderers get on in their Premier League clash with Aston Villa earlier in the day on Saturday, but the Red Devils have always been about winning silverware and so cup competitions still carry great importance.
Ole Gunnar Solskjaer would dearly love to pick up his first major trophy as a manager too, particularly after a season in which his future has once again come under intense scrutiny at times.
Wednesday night’s 3-0 win over fellow Champions League hopefuls Sheffield United means that the Norwegian is now enjoying his longest unbeaten streak since taking over as interim boss, and with their next five games including this one all coming against teams currently in the bottom seven of the Premier League they will be confident of extending that further still.
Not since January’s visit to Anfield, eight matches ago, have Man United been beaten away from home, including FA Cup triumphs over Tranmere Rovers and Derby in that time.
Norwich have also been drawn away from home in all three of their FA Cup matches in this season’s competition, but that has not hampered their progress with wins over Preston North End, Burnley and a penalty shootout victory over Spurs.
Any feelgood factor from that Tottenham win has long since evaporated, though; Josip Drmic’s 78th-minute strike in that game on March 4 was the last time Norwich scored a goal, with three blanks in three defeats either side of lockdown since then.
Indeed, Norwich have mustered only two shots on target in their two games back after lockdown so far, and unsurprisingly have the worst attacking record in the top flight. The only team in England’s top four tiers to score fewer is Stevenage, who finished bottom of the entire Football League.
The Canaries’ Premier League survival hopes look increasingly bleak following back-to-back home defeats at the hands of Southampton and Everton, the latter of which came via a Michael Keane winner on Wednesday night.
That was their 20th league loss of the season, and only once before in their history have they been beaten more often in the opening 31 games of a campaign, when they were a Third Division South team in 1946-47.
Saturday’s match will at least give them the chance to focus on something other than a likely-forlorn survival bid, and having reached the FA Cup quarter-finals for the first time since 1992 they will be desperate to make the most of it.
That season was one of only three previous occasions in their entire history that Norwich have reached the last four of this competition, so victory on Saturday would be a significant achievement even if Premier League relegation may follow not long afterwards.
As is the custom in the FA Cup, changes are expected for both sides, and there may even be more than usual with Premier League fixtures coming thicker and faster than ever.
Anthony Martial became the first United player since 2013 to score a Premier League hat-trick on Wednesday night, but he and Marcus Rashford could be among the players to sit out as Mason Greenwood and Odion Ighalo push for starts.
Solskjaer could use the chance to give Paul Pogba some more minutes, but his new midfield partner Bruno Fernandes may not be included.
Brandon Williams, Eric Bailly, Sergio Romero, Andreas Pereira, Juan Mata and Jesse Lingard could all come back into the side, while injury doubts Phil Jones and Axel Tuanzebe could also be in contention.
Norwich do not have quite as many options for rotation and may even be close to the point of prioritising FA Cup glory over the unlikely scenario of Premier League survival.
The likes of Emiliano Buendia, Teemu Pukki and Todd Cantwell – arguably their three best players this season – were benched against Everton and could therefore start this match.
The Canaries are still without injured trio Grant Hanley, Christoph Zimmermann and Sam Byram, all of whom will miss the remainder of the campaign to leave Farke with very limited rotation options in defence.
FA Cup matches with numerous changes are always more difficult to call, but even with a vastly different XI it is difficult to back against the visitors in this one.
Norwich have defied the odds and their Premier League form already in the FA Cup this season, but we believe this will be one step too far for them and expect United to make it through to the semi-finals.