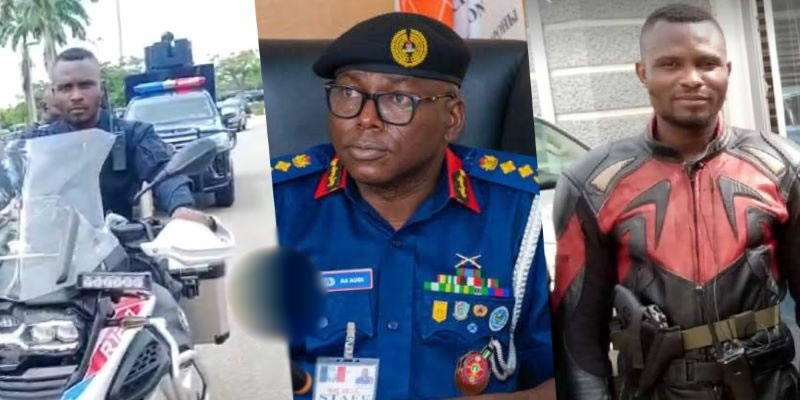 The Nigeria Security and Civil Defence Corps (NSCDC), has confirmed the death of its first outrider, ASC I Dickson Dike in a ghastly accident.

An outrider is a person who accompanies a vehicle — usually on a motorcycle — as a guard or escort.

NSCDC spokesman confirmed the death in a release on Thursday.

Dike, said to be a member of the team that works with Ahmed Audi, the NSCDC commandant-general (CG), reportedly died on Tuesday evening while escorting the CG home.

The NSCDC officer was said to have lost control of his bike, and suffered severe head injuries in a crash which reportedly took place along the Asokoro district extension near the CG’s official residence.

The officer, it was learnt, died while attempting a stunt near a major intersection before the CG’s residence, just after attempting a U-turn to join the rest of the convoy.

He was, however, said to have missed the brakes and he ran into a concrete culvert while on high speed.

In the statement on Thursday, the NSCDC mourned the outrider, and described him as a gallant officer.

“The entire management and staff of Nigeria Security and Civil Defence Corps mourns a very gallant officer, ASC I Dickson Dike, the first outrider of the corps. May his gentle soul rest in perfect peace,” the statement reads.