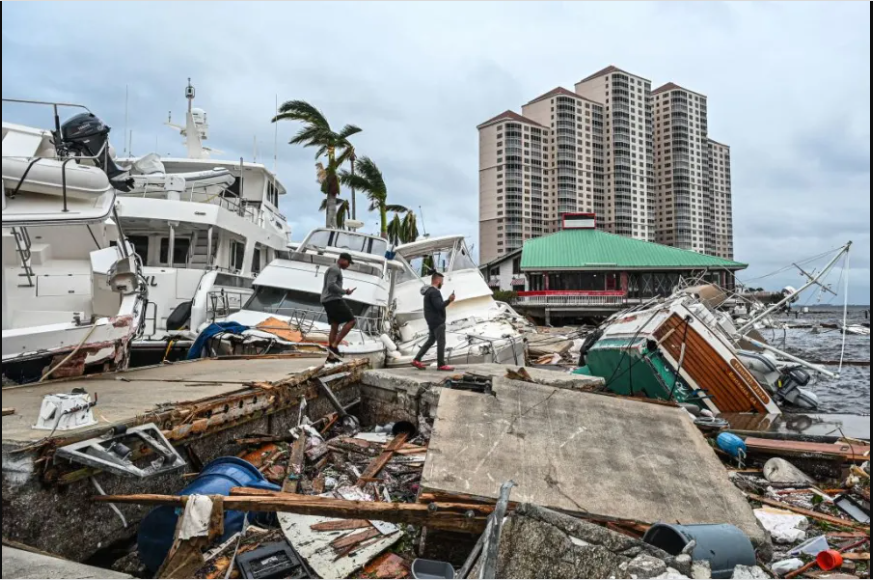 Hurricane Ian left a path of destruction in southwest Florida, trapping people in flooded homes, cutting off the only bridge to a barrier island, damaging the roof of a hospital intensive care unit and knocking out power to 2.5 million people as it dumped rain across the peninsula on Thursday.

One of the strongest hurricanes to ever hit the United States threatened catastrophic flooding around the state. Ian’s tropical-storm-force winds extended outward up to 415 miles (665 km), drenching much of Florida and the southeastern Atlantic coast.

Authorities confirmed at least one storm death in Florida. A 72-year-old man was found dead early Thursday in water in a canal behind his home in Deltona near Daytona Beach, the Volusia County Sheriff’s Office said in a statement.

It said he appeared to be using a hose to drain his pool into the wide canal and fell down an incline that was “extremely soft and slippery due to the heavy rain.”

Another Florida sheriff said he believed the death toll would be “in the hundreds.” Lee County Sheriff Carmine Marceno told ABC’s “Good Morning America” that his office was receiving thousands of 911 calls from people needing rescue in the county that includes Fort Myers, but roadways were still impassable and bridges were compromised.

“It crushed us,” Marceno said. “We still cannot access many of the people that are in need.”

Emergency crews sawed through toppled trees to reach people in flooded homes, but with no electricity and virtually no cell service, it was impossible for many people to call for help from the hardest hit coastal areas where the surge came in.

“Portable towers are on the way for cell service. Chances are your loved ones do not have the ability to contact you,” said the sheriff’s office in Collier County, which includes Naples. “We can tell you as daylight reveals the aftermath, it’s going to be a hard day.”

In Lee County, which includes Fort Myers, just south of where Hurricane Ian made landfall, the sheriff’s Office posted a phone number family and friends can call for welfare checks, and said “If the line is busy, keep trying.”

The National Hurricane Center said Ian became a tropical storm over land early Thursday and was expected to regain near-hurricane strength after emerging over Atlantic waters near the Kennedy Space Center later in the day, with South Carolina in its sights for a second U.S. landfall