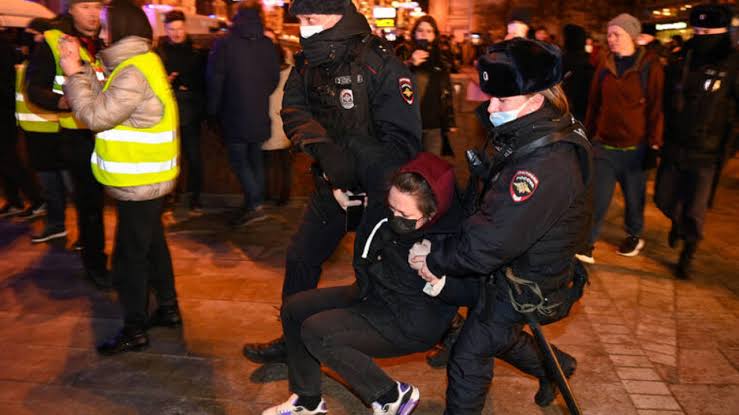 Over 6,400 activists arrested at anti-war demonstrations in Russia.

Civil rights site OVD-Info reported on Tuesday that over 6,400 people had been arrested in Russia, since the protests against the war in Ukraine started on Feb. 24.

About half of the arrests, 3,126, were made during protests in Moscow, while 2,084 were in St Petersburg, OVD-Info said.

The invasion of Ukraine was driving many in Russia to protest, and Russian security forces had responded brutally to demonstrators.

Russian authorities urged people not to take part in the unauthorised rallies. They had also repeatedly banned rallies, citing the pandemic.

In Brussels, EU foreign policy chief, Josep Borrell praised demonstrators in Belarus who were calling for a more democratic approach at home under long-time leader Alexander Lukashenko while protesting the war in Ukraine.

Borrell in a video posted on Twitter and subtitled in in three languages, Belarusian, Russian and English appreciated the people for their efforts in support of Ukraine.

“To the Belarusian people: many of you took huge personal risks struggling for a free and democratic Belarus.

“Now you are raising your voice against Russia’s war on Ukraine and [President] Lukashenka’s decision to support it. Thank you for your bravery. EU stands with you. #StandWithUkraine.’’

Meanwhile, thousands of people demonstrated for peace and democracy in the western German city of Cologne on Monday, as the city’s traditional Carnival got under way against the backdrop of the Russian invasion of Ukraine.

Traditionally marked by a parade, “Rose Monday” this year was transformed into something quite different. “It is impressive how many people are on the streets in Cologne,” a police spokesman said.

According to the Cologne Carnival Festival Committee and police, some 250,000 people took part.

“This is, I think, the most important Rose Monday procession in my lifetime,” musician Peter Brings, 57, told WDR television.

Costumed and non-costumed people marched together through the streets. Many carried banners with inscriptions such as “Putin Go Home” and “Dear Russian people, be Russians not Putinians”.

North Rhine-Westphalia’s Premier Hendrik Wüst also joined the demonstration. “The best way to be on your feet today is to demonstrate for peace and freedom in Europe,” he said.