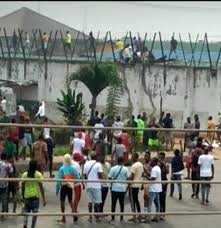 Share this on WhatsApp
Naija prisons look like medieval dungeons. Add the deplorable conditions that leave inmates starved to the equation, and you have an environment where prison guards have the unfair advantage, to say the least
I am not sure there has ever been a break in Kirikiri for instance. Right in front of that hell is the stakes that will make you relive the horrors of an era best forgotten, when armed robbers and a few unfortunate political enemies were tied, to meet their untimely end in a barrage of armor-piercing bullets.
The Maximum Prison at Kirikiri, for instance,  shares a fence with the Navy Barracks and enjoys a generous offset to its North that’ll afford a prison guard the luxury of time to pick targets off one after the other like it’s a shooting practice.
The medium security prison in Badagry faces the Lagos lagoon, and is cordoned off for several metres on the eeriely quiet shoreline street called Marina.
I observed that Nigerian prisons are often built to make escape nearly impossible. Even if you make it past the prison walls, there’s plenty of space and time for the most inebriated guard to hone his marksmanship with your emaciated body.
Let’s not even talk about prison guards or officials. There’s a reason you don’t see them in danfo interacting, laughing and claiming “staff”.
It’s not like our prisons compare to others in serious countries in terms of being escape proof, but that these ones are not built for reformation. The thought of being a Nigerian whose basic human rights count for nothing around such a facility will make you reconsider any stupid move, knowing how long it may take Amnesty International to get on your case.
The Nigerian prison is hell on Earth. Anyone planning to escape it or break in without a serious plan to outgun and do real damage  is, most likely, prepared to die.
It’s not for protestors turned Jack Bauer.
This dodo is burnt. SARS-humpers should try harder.
Opinion by Tokunbo Akintola
Share this on WhatsApp

Man, 25, in court over alleged stealing of iron rods, planks

Admin -
A Peoples Democratic Party (PDP) lawmaker, and Minority Leader of the House of Representatives, Ndudi Elumelu, has declared his support for President Muhammadu Buhari...