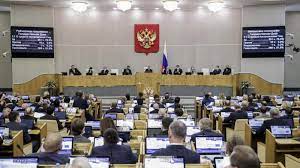 It was gathered that over 400 deputies in the Russian Duma voted unanimously in favour of Luhansk, Donetsk, Zaporizhzhya, and Kherson becoming part of the Russian Federation as well as enacting various laws.

Pavel Krasheninnikov, head of the Duma legal committee, had said that “The laws fully strengthen the main social and economic guarantees of people living in the territories and create a system of legal protection for citizens.”

Russian citizenship is to be granted to all residents of the occupied regions who apply for a passport and take an oath to the country’s constitution, which will prompt pension payments and health care.

The Russian rouble will be introduced as the currency, but until the end of the year residents will still be able to pay with Ukrainian hryvnia.

By June 1, 2023, new administrative bodies will be created.

President Vladimir Putin signed the treaties of accession on Friday with the Duma having to approve them.

The upper house, the Federation Council, also ratified the annexation.

Foreign Minister Sergei Lavrov, as a guest at the Duma, accused the United States of moving against Russia just like Nazi dictator Adolf Hitler once did against the Soviet Union.

“The U.S. has subjugated practically the entire collective West and mobilised it to make Ukraine an instrument of war with Russia – just as Hitler gathered the majority of the countries of Europe for an invasion of the Soviet Union,” Lavrov said.

FG promises Second Niger bridge ready for use during Christmas