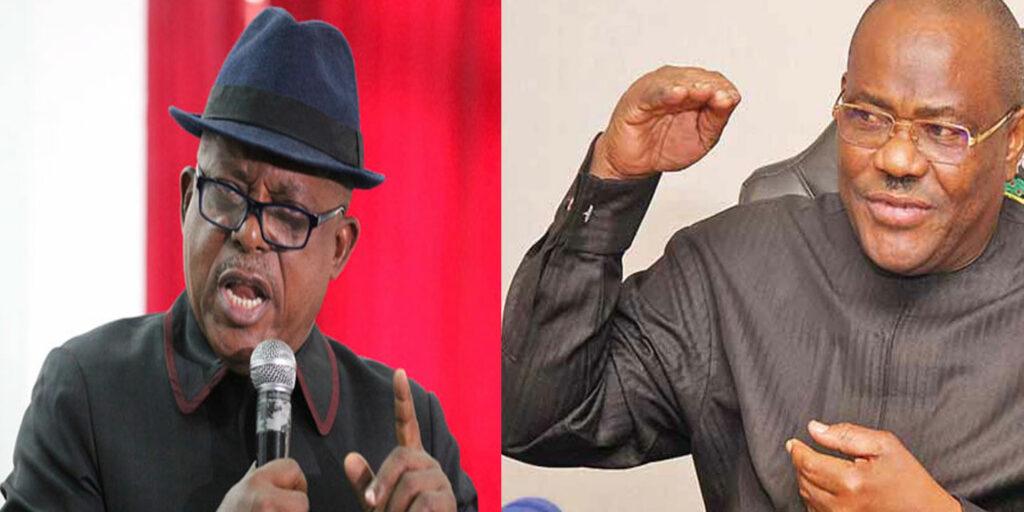 The second term of Uche Secondus, National Chairman of the Peoples Democratic Party (PDP) is causing serious rumpus in the once vibrant opposition party as Governor Nyesom Wike of Rivers state and some other notable members of the party have objected to his ambition.

It was learnt that intra-party politics in the Rivers State chapter of PDP has “complicated” the relationship between Wike and Secondus.

While Wike is said to be scheming to hand over to a candidate from the upland area of the state which has been governing since 1999, Secondus prefers a riverine area.

The alleged presidential or vice presidential ambition of Wike in 2023 is another factor which has deepened the political cleavages between godfather and his godson. Secondus is said to be “not too keen on Wike’s ambition.”

National Daily gathered that Wike has already secured the backing of some PDP governors to ensure that the National chairman is sacked before December, 2021. Secondus, on the other hand, is not going down without a fight.

He is leading his own supporters comprising some governors, members of the PDP Board of Trustees and some party leaders. This group is all out for his retention in office.

Secondus’ supporters brand him the “most transparent national chairman in the history of PDP, who does not take bribes from aspirants or candidates standing for any elective post.”

Sources traced the cold war between the duo to December 2020 when NWC members met with Wike in Port Harcourt during which he told the party executives that all of them would be sacked by January 2021.

Secondus and the NWC members worked round the clock to foil the plot.

It was gathered that efforts by some church and party leaders to reconcile the two sides have failed to yield any meaningful result, with Wike unrelenting in writing off Secondus and the NWC.

A source in the NWC said: “At a time the PDP should be consolidating for 2023, there is a plot to remove all party executives before December when our National Convention ought to elect new leaders for the party.

“Those behind the sack of the National Chairman and the NWC have the full backing of Governor Wike who has some differences with Secondus. It is a carryover from the 2018 presidential primaries when Secondus refused to do the bidding of Wike.

It was learnt that Governor Aminu Tambuwal, who was Wike’s favourite, lost out to ex-Vice President Atiku Abubakar.

Even some elders of the party and church leaders have tried to broker peace between Wike and Secondus but the governor insisted that the NWC must go.

It is, however going to be a fight-to-the-finish because PDP leaders in the North and South East are solidly behind Secondus and his team, whose tenure expires in December, the source added.

“It is not the first time that the governor will demand the exit of the NWC. Last December when Secondus led NWC members to him, he told all of us that we would be removed by January 2021.

According to party sources, some PDP governors opposed to Secondus’ continued stay in office have told the chairmen of the party in their various states to be prepared to work against the national chairman.

The governor is said to be particularly unhappy with Secondus for allowing the All Progressives Congress (APC), which according to him has a governance challenge, to keep poaching PDP governors.

According to the former federal legislator, Secondus has been a good leader of the party. “That is why I went to him and told him when I was approached to join those plotting his removal. But he must act fast in the interest of the party.

“He cannot fight the governors. They control the party in their states and at the zonal level to a large extent.

“In my opinion, the number of governors against the national chairman is growing by the day.

Wike, in the run up to last year’s governorship primaries of the PDP in Edo State, had labelled some members of the party’s NWC as tax collectors.

It was also gathered that a former presidential aspirant of the party recently met with some party leaders and charged them to do everything possible to retain Secondus as chairman beyond December.

According to reliable sources, the PDP chieftain, who is said to be eyeing the party’s 2023 presidential ticket, fears that Secondus’ sack will threaten his chances of contesting the next presidential election on the platform of the PDP.

Mother, son, 3 others regain freedom after 66 days in captivity