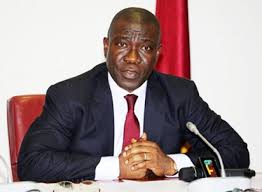 Umahi made this known in a statement at the weekend in Abakaliki, capital of Ebonyi State.

He frowned at the action of the group against Ekweremadu whom he said has been on the forefront of the struggle against the marginalization of Ndi-Igbo in the Nigerian Federation.

The zonal Chairman said he was surprised that some individuals could hide under the name of the proscribed IPOB to attack Ekweremadu after all his efforts as the leader of Southeast Senate caucus in the 8th Senate to secure the release of Nnamdi Kanu, the self-acclaimed leader of the group, from detention.

He said for Senator Ekweremadu to have travelled to far away Nurnberg in Germany to attend the second annual festival and covention organized by Ndi-Igbo resident there, was a demonstration of his undying love for Ndi-Igbo which he has been exhibiting over the years.

Umahi urged Ekweremadu not to be discouraged by the attack; but see it as one of the many sacrifices he has to pay in pursuit for justice and better treatment for Ndi-Igbo both within and outside the country.

He also called for the arrest and prosecution of the perpetrators of the dastardly act to serve as a deterrent to others.

“I advised any individual or group that has any genuine reason to agitate, to do so, through the Southeast Governors Forum, the Ohanaeze Ndi-igbo and through other legitimate means within the Nigerian federation; rather than resorting to self-help” he stated.