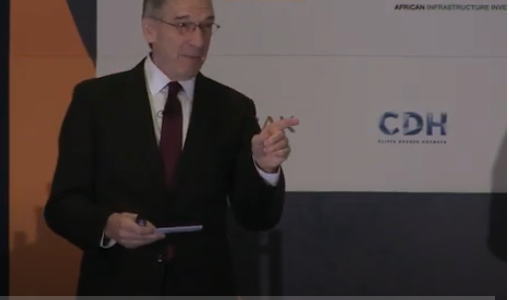 He promised his employer, during confirmation, to deliver Africa from China—and parcel it to America. He sees the AfDB as the lever, and the bank’s President Akinwunmi Adesina as no object. He’s wrong.

In a 260-page response to his allegation early in April, Africa Development Bank’s President Akinwunmi Adesina hit his accusers.  And it was revealing.

He said the purpose of the allegation—nepotism, disregard for rules—is not to report fraud or corruption. Definitely, no. Publish What You Fund  rated the AfDB the 4th of 45 global development institutions in 2018, three years into his fist five-year term.

Nor is the accusation about misconduct.

“Quite the contrary,” Adesina wrote in the document. “It has other, hidden motives.”

He almost pinpointed the accusers, too, and raised the possibility of what some called vendetta. “The idea that other people are acting in concert with the whistle-blowers is not pure speculation,” the first Nigeria to head the AfDB said.

Who, then, hates Adesina’s nose?

They might be a legion. But one man is likely the mastermind.

He’s among the executive directors representing the 80 countries and shareholders of the bank and the 32 contributors to its African Development Fund launched in 1972.

The largest shareholder of the bank is Nigeria (8.2 percent), and following it is the US (6.6 percent). All member countries have representatives on the bank’s board of governors, each fronting for the interest of their country in what is supposed to be a development effort for Africa.

That sort of corporate governance permits manipulation, as many suspect now. One of Africa’s leaders and former President Olusegun Obasanjo has just alerted his fellows to stand up and defend Adesina and AfDB against such control.

“If we do not rise up and defend the AfDB Group, this might mean the end of the bank, as its governance will be hijacked away from Africa,” the Nigerian former president wrote in letter to African ex-presidents Friday.

The suspicion of prizing off the bank’s governance from Africa isn’t difficult to believe looking at the role the US and China have been playing in Africa. The continent has become the battle ground for foreign policies for the two non-regional members who are represented on AfDB board to seek their national interests—in trade and investment.

The allure of Africa—its natural resources and $1.3 trillion consumer purchasing power—can be very tempting. Although the West think the black Continent needs them the most,

“Africans do indeed want to do business with the U.S. And it’s not so easy. And, yes, China is very aggressive. And to me, there’s something of the tortoise and the hare,” said Stephen Dowd, executive director and US representative on AfDB board. He revealed this during a meeting of the Sub-Saharan African Advisory Committee of the Export-Import Bank of the US which took place in Room 1125B, 811 Vermont Avenue, NW, Washington on Oct 21, 2019. Daniel Runde, the committee chairman, moderated the meeting, which Down joined by phone.

“The Bank is the key institution on the continent for trade and investment,” Dowd told Runde. “And I need to say that for the record. And we’re not comfortable with certain types of lending and so on. I won’t go into that.”

Dowd, as chairperson of the AfDB audit and finance committee, nearly spilled his gut during the meeting, but for occasional bridle he applied using the clause “I won’t go into that”. But it is obvious he has an axe to grind with Adesina and his style of steering of the bank.

The executive director has some worries. Two of them: China is outpacing the US in investing in Africa; and the lending by AfDB and other regional interventionist banks is too generous for his liking.

“We certainly support strict compliance with the IMF World Bank debt sustainability framework,” he said. As the chairperson of the audit and finance committee of the AfDB, Dowd stated he has quite a role. “I won’t go into it,” he, again, told the committee.

And, truly, the Bretton Woods twins blew their lids early in the year on development banks and indebtedness in Africa.

“We have a situation where other international financial institutions and to some extent development finance institutions as a whole, certainly the official export credit agencies, have a tendency to lend too quickly and to add to the debt problem of the countries,” said World Bank’s President David Malpass in February, about the time the AfDB crisis started simmering.

The AfDB, however, bit back. “The World Bank’s operations approved for Africa in the 2018 fiscal year amounted to $20.2bn, compared to $10.1bn by the African Development Bank,” a statement by the AfDB said, insisting the World Bank was just being mischievous by throwing the first stone.

Malpass and Dowd are President Donald Trump’s nominees. It thus matters little if they both mind the same thing—discrediting the role of the AfDB as pro-China.

Dowd is actually expected to deliver on Trump’s Prosper Africa foreign policy which embraces security, poverty eradication, among others. The policy will materialise by ballooning America’s volume of trades and investment on the continent.

The agric-economist gave the Congress his word when he went there as a nominee for screening and confirmation in 2017.

“If confirmed, I would lead the effort to leverage the U.S. contribution to the bank in order to ensure that its finance efforts are used to the best benefit for Africa, that they are consistent with U.S. foreign policy interests there, and that American taxpayers get a good return for their money,” he told the Congress.

The rub is: Chinese is a relentless adversary that has captured a vast territory of Africa with cheap loans. For the US to entrench its interests, and get a bang for each buck it invests in the bank, Dowd believes the US has to put Adesina on a short leash first. That’s just about the best way to steal the show.

“And here’s what I say….We’re not the perfect guys. But we’re the good guys,” he said at the EXIM Bank committee meeting.  “And if you do business with an American firm, you will get value for your money. And we will not saddle you with unsustainable debt.”

And who’s the baddie? The one who swamps Africa in debt, and thrives in corruption and lawlessness—the morass in which the continent and its institutions waddle. The Red Dragon cuts that figure. From 2000 to 2017, China handed out $143 billion in loans to African governments and their state-owned enterprises—for infrastructure development.

Dowd thinks this lavish kind of lending is gross, no matter its terms and benefits. And he’s helping America forge a weapon of that to fight a soft war with China, in Africa, inside the AfDB.

“We’re not just an alternative to China. We are a better alternative. And so we embrace, yeah, we embrace the rule of law,” said Dowd.  “And the Chinese model is very often corruption.”

He agreed, though, not everything China does by the way is bad in Africa.

Adesina, however, welcomes any effort to develop Africa’s infrastructure—other than aid from the West, especially the US.

For Dowd and those who get hot and bothered because China is omnipresent in Africa, the AfDB president has a bromide: Do not worry about why China is present; be concerned about why the US is absent.

His clipped  remarks about Africa,  and his burst of energy to make the continent develop by way of investment—and not by boons—could have earned him the alleged Dowd enmity which now hazards his re-election, even as the only candidate.

And the enemy is not a person given to drama. Not much has been heard from him in public about the AfDB, except from the transcript of the Vermont meeting. That means he is deep and connected (he talked of ‘friends of mine and new friends in Africa’).

Those whistleblowers hit a brickwall in the AfDB ethics committee. It first dismissed all the allegations as unfounded. That decision could have put paid to the crisis since it came from the bank’s channel for addressing such internal issue. There should have been no use for an independent investigator.

But the US, through its Treasury Department, promptly boxed the ethics committee into a corner, calling for an independent investigation, something that is not in the bank’s rulebook. This is the more reason Adesina’s supporters vow to eat their shoes if Dowd isn’t the guy pulling wires here.

Since a lot seems at stake here for Adesina’s enemies within the AfDB, it is not impossible the American is the hand in the glove.

Dowd, during his confirmation, promised to deliver Africa to America through the continent’s strongest financial institution—AfDB. There must be some earnestness for him to make good that promise as Trump’s administration winds down in November.

Even from his contribution in the EXIM committee meeting, Dowd leaves no one in doubt he’s on a crusade to wrest Africa from the clammy grip of Beijing. Or else bad thing will happen to Africa.

Runde asked him how it will all pan out if the EXIM Bank has less American presence and engagement in Africa.

The government Dowd serves may not actually demand Adesina’s skull on a platter of gold in the scramble between China and the US to save Africa. Trump may still want Africa to prosper during his administration. So it’s a long shot that America will pull out of the AfDB, as many envisage, if African leaders mobilise support for Adesina, and tell Washington not to feel too big for its boots.

It’s okay to expect such reaction of bullyboy Trump. He has been pulling America out of many bilateral institutions and agreements lately: WHO, the Paris Climate Accord, the Open Sky Treaty, and others.

If it eventually happens  (it may not), demolishing Adesina, for Dowd, might, all the same, trigger some sugar rush—to sate the ego.