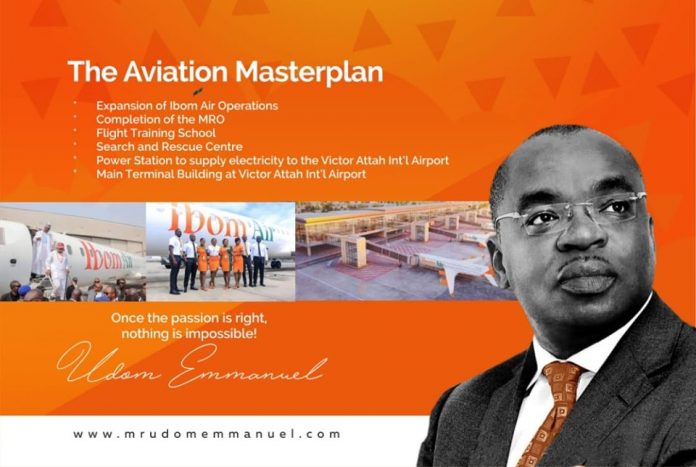 Governor Udom Emmanuel of Akwa Ibom State in the four years of his first tenure in the state implemented policies towards rewriting the achievement history of his predecessor, former Governor Godswill Akpabio in the development of the state. The governor ensured that every policy contains added value to the existing infrastructures in the state.

Accordingly, Governor Udom Emmanuel did not wait to preach the gospel of the state government searching for investors to run the Ibom International Airport but committed the state’s resources to establishment of the Ibom Air to operate from the airport to other parts of Nigeria to ensure optimum utilization of the airport. The funfair has been the use of the airport by other airlines from different parts of the country.

Governor Udom Emanuel, therefore, made Aka Ibom State the first among the 36 states of the federation to operate an airline at a time the federal government is struggling with the establish of a national carrier.

Governor Emmanuel also drew up a working document – The Aviation Masterplan – for the comprehensive development of the state’s airport and airline business.

Governor Udom Emmanuel was of the view that “once the Passion is right, nothing is impossible.”

The investment in the Ibom Airline opened opportunities for more employment and revenue in the state.

The governor at his inauguration for second tenure on May 29, 2019, declared: “Let me state here that what we have achieved already in my First Term gives me hope for what we, together can achieve tomorrow for our dear people.

I, therefore, ask for your continuous prayers and support as we work to re-write the Akwa Ibom story in gilded prints and colours.”