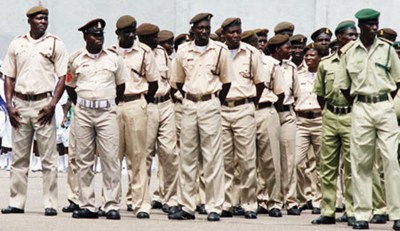 Why activities of touts, passport racketeers thrive – NIS boss
Share this on WhatsApp
Spread the love

The Imo Command of the Nigeria Immigration Service (NIS) has blamed the thriving activities of touts and passport racketeers in the state on the location of its office complex in Owerri.

The state Comptroller of NIS, Mrs Nkechi Ezugwu, said this in an interview with the News Agency of Nigeria in Owerri.

Ezugwu said that the office, which is situated in the midst of about 60 other federal establishments, was exposed to the illegal activities of touts and racketeers.

She said that the porous nature of the location made it difficult for the command to effectively check the movement of persons within and outside the premises.

“The environment is severely limiting our control of human traffic.

“This explains why touts and racketeers, who pose as NIS officers succeed in ripping off unsuspecting applicants for express service.”

“We don’t know who these touts are and we cannot control their access to the premises because other offices are also accommodated here,” Ezugwu said.

She, therefore, appealed to the State Government to relocate the agency to an exclusive, more secure and spacious environment “to enable the command to operate effectively”.

She said that the command lacked enough space to accommodate arrested illegal immigrants before their repatriation.

The state NIS boss said that applicants, who complain of exorbitant charges, were those who fail to follow the laid down procedure for passport application.

She said that the processing time had significantly reduced, adding that passport booklets could be issued within a period of three weeks, barring any issues.

Ezugwu said that such issues could border on the internet servers or discrepancies in the information provided by applicants.

“We have a process for passport application and it is on our website.

“It does not state anywhere that applicants should pay to officers.

“The proper fees are on our website as well as guides for filling out the application.

“Applicants who follow this process pick up their passports in as little as ten days or the standard processing time of three weeks,” Ezugwu said.

Also, the Passport Control Officer, Mr Cyril Alaje, told NAN that the process of collecting passports had also been simplified.

“This is to enable third parties to pick up passports with proper authorisation,” Alaje said.

He also said that alerts were usually sent to applicants once their passports were ready to enable them to come for them as soon as possible.