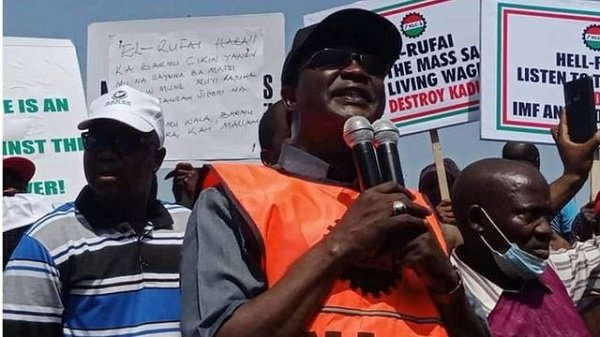 A 10 member bi-partite committee was yesterday mandated to resolve the dispute between the Kaduna State Government and organised Labour.

The panel was raised at a meeting convened by Labour and Employment Minister Dr. Chris Ngige, who waded in the industrial impasse between workers and the Governor Nasir El-Rufai administration.

Local Government Affairs Commissioner Jafaru Sani, who co-led the state delegation with the State Head of Service, Bariatu Mohammed and the leadership of NLC led by its President, Ayuba Wabba, signed a Memorandum of Understanding (MoU) at the end of the parley.

The MoU asked the parties to settle their dispute and embrace peaceful correlation by desisting from any further industrial action and victimisation of workers.

Others who signed the MOU include: Nigerian Labour Congress (NLC) Deputy President, Najeem Usman; Trade Union Services Director in the Federal Ministry of Labour and Employment, Mrs. Omoabie Akpan and the Director of Finance and Accounts, Aloy Muoneke.

Muoneke represented the Permanent Secretary of the Ministry.

Addressing reporters after the meeting, the minister said the committee, with representatives from the state government and the NLC, will critically look at the issues under contention and resolve them based on provisions of Section 20 of the Labour Act.

The MoU reads in part: “The meeting agreed that all the listed issues fall within the ambit of redundancy therefore, it was resolved that the principle of redundancy as stated in section 20 of Labour Act, Cap L 1 Laws of the Federation of Nigeria (LFN) should apply.

“The meeting also recognised that the current impasse was caused by communication gap between the State Government and NLC occasioned by both the local chapter and even the Kaduna State Government Officials.

“In view of the foregoing, the meeting resolved: To constitute a ten (10) man Bi-partite Committee comprising six (6) representatives of State Government and three (3) officials of the NLC to engage further with the objective of reverting with a work plan on how to integrate the provision of section 20 of the Labour Act CAP L1 LFN 2004 to resolve the impasse between the State Government and the NLC.

“The meeting also resolved that the Committee should have as Chairman, the Head of Service of the Kaduna State Government and assisted by a Deputy National President of the NLC.

“The Committee is expected to revert with the work plan for peaceful resolution of all issues in contention to the Honourable Minister of Labour and Employment by Tuesday 25th May, 2021.

“The work plan is to itemise the structure and sub-structure in the State and Local Government of their activities, time of commencement and envisaged final tenure of the Committee or make recommendations if in its wisdom it thinks the Committee should be a Permanent Standing Committee.

In his remarks before the meeting went into closed-door section, Ngige said that Kaduna and any other state must dialogue with the Labour as enshrined in the International Labour Organisation Conventions, to which Nigeria is a signatory.

He said that though Labour has a right to go on strike according to the provisions of the law, it should not obstruct the provision of essential services.

The minister, however, said should he fail to reconcile both NLC and the Kaduna State Government within one week, the matter will be transferred to a higher authority as prescribed by the Trade Unions Dispute Act.

The Kaduna commissioner said that the national minimum wage was being implemented in the state along with public service reform policies.

He said over 7,000 teachers have been recruited to fill in vacancies, noting that the public service consumes “N4 out of every N5 received from revenue sources.”

He said the NLC strike and protest came as a rude shock to the state government and condemned what he described as a violation of the Miscellaneous Offence Act, by NLC members who allegedly obstructed economic activities in the state.

According to him, redundancy was declared in Kaduna State in the implementation of the right-sizing policy without engaging Labour and without payment of due entitlements to the disengaged workers.

“Before any sack is contemplated, the government must first engage the workers’ unions. The strike was a last resort since letters sent to the state government had not received responses,” he explained.

It was all calm in Kaduna State yesterday following the suspension of the five-day warning strike by the NLC.

Labour called the strike to protest the sack of over 4,000 workers by the state government.

In a report, the News Agency of Nigeria (NAN) said banks, schools, markets and other businesses, including public offices, opened yesterday for business.

Also, petrol stations and cooking gas companies which hitherto shut down due to the strike opened with long queues as motorists and residents struggled to buy the products.

Electricity was on Wednesday night restored by the Transmission Companies of Nigeria (TCN) and the Kaduna Electric Distribution Company (KEDCO) after Wabba announced the suspension of the strike.