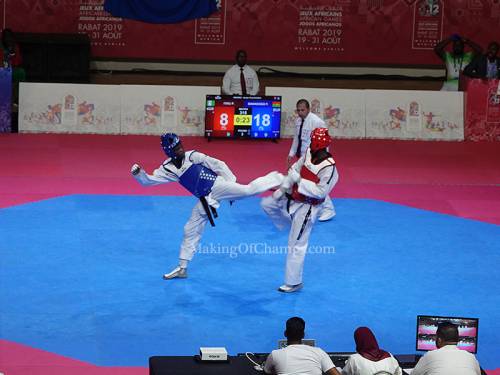 Also, the quest for medals in taekwondo continued yesterday in six events when Elizabeth Anyanacho and Uzoamaka Otuadinma also settled for bronze medals in the women’s -67kg and -73kg of the tournament, while the trio of Arinola Abdullateef, Bright Kolade and Chiamaka Onumonu were unlucky in their quarterfinal ties as they lost and will miss out from mounting the podium.

Kenyan Keep claimed the women’s title in 1hr 19min 15.377sec, finishing almost 50 seconds ahead of Aurelie Marie Halbwachs from Mauritius. Halbwachs took the silver medal on the 22.8 kilometres course, made up of six 3.8km circuits in Rabat, in a time of 1:20:03.900. Her compatriot Kimberley Le Court De Billot completed the podium in 1:22:52.541.

Algeria won three of the four A finals as the first of the rowing medals were awarded in Morocco. Nawel