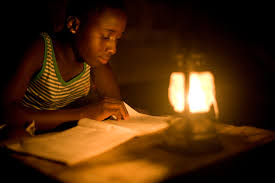 Share this on WhatsApp
Spread the love
Students of Government Girls’ College, Wamba, a boarding school in Nasarawa State, have adjusted to reading with lantern at night in the past four years. This is the consequence of perpetual electricity blackout in the school over the years for reasons the students cannot comprehend.
The Principal of the school, Rabi Yusuf, was gathered to have lamented the lack of electricity supply to the school in the past four years by the service provider in the state.
Mrs. Yusuf, in a speech at the national convention of the school’s old students, last Tuesday in Lafia, decried that students have been thrown into perpetual darkness “since electricity was cut off four years ago over unpaid bills.”
Regretting that the situation is “very bad”, the principal appealed to the old students to assist the school and relieve the students the pains of reading with lanterns during the dark hours by paying the outstanding electricity bill so that the school could be reconnected with electricity.
“It is difficult to explain how we have tried to cope without light; you will help a great deal by intervening in this area,” she had said.
She also appealed to Nasarawa State Government to renovate the hostels, classrooms and laboratories to improve the learning environment.
Mrs. Yusuf also urged government to post more teachers to teach chemistry and English, and regretted that the school had no teachers to handle the two subjects.
She also called for more matrons and security men to attend to the girls and secure the school in view of current security challenges.
In his speech, Titus Alams, the National President of the Wamba Old Students Association, WOSA, promised to settle the outstanding electricity bill.
I was shocked when the principal said that electricity supply to the school has been yanked off; I find this development particularly strange because this is a boarding school.
“We shall look at all challenges confronting the school as listed by the principal, but the most urgent need now is the restoration of electricity.
“We do not know the amount or for how long the school has been indebted, but we shall get those details and move on to rectify the problem,” he said.
Danlami Ali, the chairman, Nasarawa State chapter of the association, urged the old students to make more sacrifices toward returning the school to its old glory.
It was gathered that the school began as boys teachers school in 1975, later converted to a co-educational institution in 1988, before being turned into a girls’ school in 2004.
Share this on WhatsApp
Related Topics:Black OutElectricityGovernment Girls’ CollegeWamba
Up Next