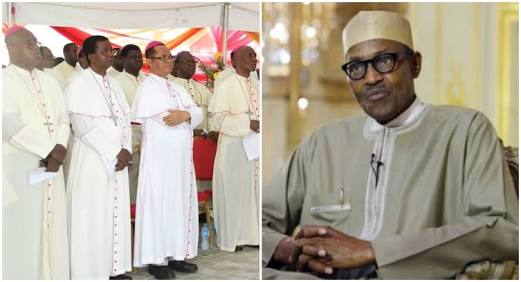 Reacting to the spate of killings, especially Christians by herdsmen in Benue and other places, the Catholic Bishops Conference of Nigeria (CBCN) has called on President Muhammadu Buhari to resign over the incessant attacks in the country.

The group made the call in a statement issued by Augustine Akubeze and Camillus Umoh, its president and secretary respectively.

The clerics condemned the killing of two priests and 17 congregants by suspected herders on Tuesday in Benue, accusing the federal government of failing in its duty to protect the lives and properties of its citizenry.

Less than 48 hours after the attack, suspected herdsmen struck at another church in Logo local government area of the state, killing at least seven people.

In the statement titled ‘When will this barbarism end?’ the clerics urged the president to consider “stepping aside to save the nation from total collapse”.

“We are sad. We are angry. We feel totally exposed and most vulnerable. Faced with these dark clouds of fear and anxiety, our people are daily being told by some to defend themselves,” the statement read.

“Whether this failure is due to inability to perform or lack of political will, it is time for him to choose the part of honour and consider stepping aside to save the nation from total collapse.”

The religious leaders accused the president of failing to call the security agencies to order while alleging that there is a conspiracy between both parties.

“We are sad and fear that the clock is ticking. The bomb must be defused quickly before it explodes,” the statement read.
“Since the president, who appointed the heads of the nation’s security agencies, has refused to caution them even in the face of the chaos and barbarity into which our country has been plunged, we are left with no choice but to conclude that they are acting a script that he approves of.

“If the President cannot keep our country safe, then he automatically loses the trust of the citizens.”

Share this on WhatsApp
Related Topics:2019 presidential electionPresident Muhammadu Buhari
Up Next